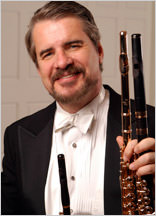 The Yale School of Music’s Faculty Artist Series presents a recital by Ransom Wilson, world-renowned flute soloist and chamber musician, on Wednesday, December 17 at 8 pm in Morse Recital Hall in Sprague Memorial Hall (470 College St at Wall St). Though Mr. Wilson performs often with his faculty colleagues in chamber music and as a conductor, this is a rare opportunity for area music lovers to hear him in a solo recital. The program will feature music by Fauré, Dutilleux, Martinu, and Martin.  Wilson, considered one of the world’s preeminent flutists, will perform with pianist Ken Noda.
For more information, visit the Yale School of Music website, www.yale.edu/music or call 203 432-4158.

Ransom Wilson, flute, studied at the North Carolina School of the Arts and the Juilliard School before studying with Jean-Pierre Rampal. As soloist he has appeared with the Israel Philharmonic, the English Chamber Orchestra, the London Symphony Orchestra, I Solisti Veneti, the Prague Chamber Orchestra, the Orpheus Chamber Orchestra, among others. He is an Artist Member of the Chamber Music Society of Lincoln Center. An active conductor, Mr. Wilson holds posts with Solisti New York, Opera Omaha, the San Francisco Chamber Symphony, and the OK Mozart Festival in Oklahoma. He founded the the Mozart Festival at Sea, and received the Republic of Austria’s Award of Merit in Gold for his efforts on behalf of Mozart’s music in America. A supporter of contemporary music, he has had works composed for him by Steve Reich, Peter Schickele, Joseph Schwantner, John Harbison, Jean Francaix, Jean-Michel Damase, George Tsontakis, Tania Léon, and Deborah Drattel.
http://www.ransomwilson.com/