Pierre Réach, the celebrated French pianist, will perform J. S. Bach’s Goldberg Variations on the Horowitz Piano Series on Tuesday, January 28 at 8 pm in Morse Recital Hall in Sprague Memorial Hall (470 College Street, corner of Wall St., New Haven).  Réach has twice recorded and often performed this singularly challenging and important work, and has received broad respect for his interpretations.  Tickets to the performance are only $13 to $24 (students $8).

For more information and to purchase tickets, visit the Yale School of Music website at    www.yale.edu/music or call 203 432-4158. Box office hours are Monday–Friday, 9 am to 5 pm, in the Sprague Hall lobby, 470 College Street, New Haven. 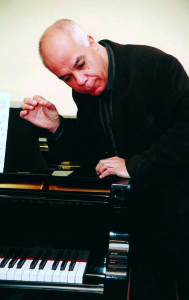 The career of pianist Pierre Réach is defined by his international performances, pedagogical activities, and organization of wide-ranging artistic events. His career began in a classic way: after brilliant studies at the Conservatoire National Supérieur de Paris, he was accepted in the Improvement Cycle and then studied several years with Maria Curcio in London. During this period, Pierre Réach received numerous awards: First Prize in the Olivier Messiaen International Piano Competition in Paris, a Medal in the Artur Rubinstein International Piano Competition in Israel, First Prize in the Pozzoli International Competition in Milano, and Second Prizes in the Maria Canals and Jaén Competitions (Spain), as well the Casella Competition (Italy).  He became the assistant of Yvonne Loriod for several years in the CNSM in Paris. Pierre Réach has appeared, in solo recitals and with orchestras, around the world, from Japan and Korea to England and France. Since 2002 he has undertaken an annual concert tour of China.  He has played in festivals such as Nohant, Saint Riquier, Lisztomania de Chateauroux, Prades, Menton, Strasbourg, and Vaison la Romaine (France); Brescia-Bergamo, Fenice, Pomerigi Musicali, and Festival Liszt de Grottammare (Italy); and Saint Petersburg, Tokyo, Seoul, and Shanghai.