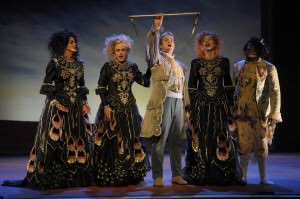 Follow the sound of Tamino’s magic flute into Mozart’s bewitching fairytale opera, where good triumphs over evil, darkness gives way to light, and love conquers all.

The Magic Flute, Mozart’s last opera, is one of the most widely-performed and best-loved works in the repertory, with both comical whimsy and profound symbolism in abundance. It is actually a Singspiel, or “song-play,” with music and spoken dialogue. For this production, the spoken dialogue is in English, and director Marc Verzatt and Yale voice professor Richard Cross have collaborated on a new and often hilarious translation. The music will be sung in German with projected English translations.