Recital will feature music of Schubert, Beethoven, Schumann, and Brahms 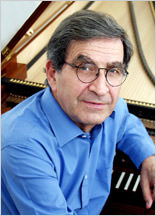 Malcolm Bilson, acclaimed for his pioneering work in the period-instrument movement, will give the inaugural recital on the Yale School of Music’s new fortepiano on Tuesday, February 24 at 8 pm in Morse Recital Hall in Sprague Memorial Hall.  The program, which is part of the Horowitz Piano Series, will include Schubert’s Impromptu in F minor; Beethoven’s Sonata in E-flat major, Op. 31, no. 3; Schumann’s Forest Scenes; and selections from Brahms’s  Opp. 76, 118, and 119. Tickets are $10 to $18, students $5.  The fortepiano was built by R.J. Regier, whose Maine workshop designs and crafts fortepianos and harpsichords based on historical examples.

For more information and to purchase tickets, visit the Yale School of Music website at music.yale.edu or call 203 432-4158. Box office hours are Monday–Friday, 9 am to 5 pm, in the Sprague Hall lobby.

Malcolm Bilson has been at the forefront of the period-instrument movement for over thirty years. A member of the Cornell Music Department since 1968, he began his pioneering activity in the early 1970s as a performer of Haydn, Mozart, Beethoven and Schubert on late 18th- and early 19th-century pianos. Since then he has contributed to the restoration of the fortepiano to the concert stage and to fresh recordings of the “mainstream” repertory. He was awarded an honorary doctorate by Bard College and is a Fellow of the American Academy of Arts and Sciences. Mr. Bilson has recorded three cycles of Mozart piano works: the piano concertos with John Eliot Gardiner and the English Baroque Soloists, the piano-violin sonatas with Sergiu Luca, and the solo piano sonatas. His traversal of the Schubert piano sonatas was completed in 2003, and in 2005 a single CD of Haydn sonatas appeared on the Claves label. In the fall of 1994 Bilson and six of his former artist-pupils presented Beethoven’s 32 piano sonatas, the first time that these works had been given as a cycle on period instruments. In addition to his activities at Cornell, Professor Bilson is adjunct professor at the Eastman School of Music. He gives annual summer fortepiano workshops in the United States and Europe, as well as master classes and lectures around the world.