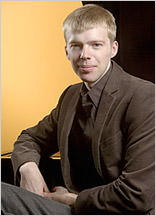 Andrew Norman '09AD has been awarded the prestigious Berlin Prize in Music Composition. Beginning in the fall of 2009, Norman will spend a year in residence at the American Academy in Berlin. The Academy provides the composer-in-residence with new experiences and professional opportunities by offering a world-class venue for his music as well as a network of professional mentors and colleagues. Norman will also have a concert of his music performed by members of the Berlin Philharmonic. "I'm very excited," said Norman.

Composer Andrew Norman is quickly gaining recognition as a strong new voice in American contemporary music. Highly regarded by composers such as John Corigliano, he received his Bachelor of Music degree summa cum laude and two years later earned his Master of Music degree in composition at the University of Southern California Thornton School of Music, where he was twice named the school’s most outstanding graduate. Norman has received commissions from the Minnesota Orchestra, William Kapell Piano Foundation, SCI, Modesto Symphony, CSU Stanislaus Symphony, and New York Youth Symphony. His honors include the 2004 Jacob Druckman Prize from the Aspen Music Festival and School, three Morton Gould Young Composer Awards, the 2005 Rudolf Nissim Prize for his orchestral work Sacred Geometry and the 2005 Leo Kaplan Prize from ASCAP, a BMI Student Composer award, and top honors in the NFMC Beyer Awards, MTNA Composition contest, and USC Undergraduate Symposium for Scholarly and Creative Work. Norman’s music has been read at the Minnesota Orchestra’s Composers Institute and the National Youth Orchestra Festival, and has received performances throughout North America, Europe, and Japan. Norman is currently pursuing an Artist Diploma at the Yale School of Music, where he studies with Martin Bresnick.