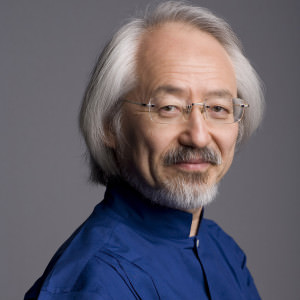 The Yale Institute of Sacred Music and Yale School of Music are pleased to announce the joint appointment of eminent Bach scholar and conductor Masaaki Suzuki as Visiting Professor of Choral Conducting and conductor of Yale Schola Cantorum, the University’s renowned chamber choir. The two-year appointment will begin July 1, 2009.

Since founding Bach Collegium Japan in 1990, Suzuki has established himself as a leading authority on the works of J.S. Bach. He has remained the Collegium’s music director ever since, taking the group regularly to major venues and festivals in Europe and the United States and building up an outstanding reputation for the expressive refinement of his performances. In addition to conducting, Suzuki is also acclaimed as an organist and harpsichordist.

He is regularly invited to work with distinguished European soloists and groups, such as Collegium Vocale Gent and the Freiburger Barockorchester; he recently appeared in London with the Britten Sinfonia in a program of Britten, Mozart and Stravinsky. Forthcoming engagements with other ensembles include the Hong Kong Philharmonic, the Nagoya Philharmonic and the Netherlands Radio Chamber Philharmonic Orchestras. In 2001 Suzuki was decorated with the Federal Order of Merit from Germany.

His commitment to sacred music is demonstrated both by his deep reflection on theological meanings in the music he conducts, and also in his interest in music used by worshippers of any faith, in or out of a liturgy. Following his return to Japan from the Netherlands, he launched a project to translate into Japanese the entire Genevan Psalter—a book of psalm settings developed in the Reformation that enabled congregations to sing the sacred texts in their own language. This collection is now used in Christian churches throughout Japan.

“Suzuki’s exquisite artistry, insightful interpretations of Baroque music, and his deep spiritual connections to sacred music make him an ideal colleague,” commented Martin D. Jean, director of the Yale Institute of Sacred Music, in announcing the appointment. “He will make a valuable contribution to the interdisciplinary work of the Institute,” Jean added.

Robert Blocker, the Henry and Lucy Moses Dean of Music, noted, “Masaaki Suzuki’s artistry as conductor, organist, and harpsichordist can be measured only in superlatives. His recordings of the Bach choral and harpsichord works offer insight into his understanding and passion for the musical arts. Suzuki’s international stature and his commitment to teaching ideally suit him for the joint Visiting Professorship in the Institute and School.”