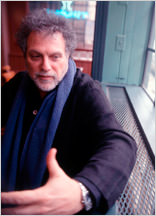 Martin Bresnick was born in New York City in 1946 and his principal teachers of composition include György Ligeti, John Chowning, and Gottfried von Einem. Presently Professor of Composition and Coordinator of the Composition Department at the Yale School of Music, he has also taught at many prestigious schools including the San Francisco Conservatory of Music, Eastman School of Music, Oxford, and the Royal Academy of Music. In 2006 he was elected to membership of the American Academy of Arts and Letters. Mr. Bresnick's compositions cover a wide range of instrumentation, from chamber music to symphonic compositions and computer music. His orchestral and chamber music has been performed by ensembles around the world. He has received many prizes including a Fulbright Fellowship, The Chamber Music Society of Lincoln Center Elise L. Stoeger Prize for Chamber Music, and a Guggenheim Fellowship.