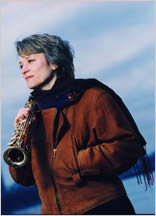 The Yale School of Music presents a special performance on its Duke Ellington jazz series by soprano saxophonist and composer Jane Ira Bloom at 8:00 pm on Friday, March 27 in Morse Recital Hall in Sprague Memorial Hall. A graduate of Yale College and the Yale School of Music, Bloom has been a pioneer in the use of live electronics and movement in jazz.

According to Pulse, she possesses “one of the most gorgeous tones and hauntingly lyrical ballad conceptions of any soprano saxophonist.” In addition to Bloom, the quartet’s performers are Dawn Clement, piano; Mark Helias, bass; and Jaz Sawyer, drums.

Said Bloom, “Coming back and playing in New Haven has a lot of meaning for me because it's where my career as an improviser began.” She reminisces, “I was at Yale and playing out in New Haven from ’72 to ’77 during a period that jazz historians have now called the ‘New Haven Renaissance.’ There were so many creative improvisers and so much activity going on in the city. Being part of a community like that inspired me in ways that I never knew at the time.”

Soprano saxophonist/composer Jane Ira Bloom is a pioneer in the use of live electronics and movement in jazz. Her continuing commitment to “pushing the envelope” in her music has lead to collaborations with such outstanding artists as Charlie Haden, Ed Blackwell, Rufus Reid, and Min Xiao-Fen. She has composed and performed site-specific works at Carnegie Hall, the Kennedy Space Center, the Houston Astrodome, and others as well as performances at clubs and jazz festivals worldwide. She is the recipient of numerous grants, including a 2007 Guggenheim Fellowship, and the winner of the 2007 Mary Lou Williams Women In Jazz Award, the 2008 Jazz Journalists Association and Downbeat International Critics Poll for soprano sax, the International Women in Jazz Masters Award, and the IAJE Charlie Parker Fellowship for jazz innovation. She has recorded and produced 13 albums of her music from 1977 to the present. In 1976 she founded her own record label and publishing company (Outline Music) and later recorded for ENJA, CBS, and Arabesque Records. Bloom has been on the faculty of the New School for Jazz and Contemporary Music in New York City since 1998. She holds degrees from Yale University (BA ’76) and Yale School of Music (MM ’77), studying with David Mott, Martin Bresnick, Robert Moore, and Joseph Viola. Nat Hentoff has called Bloom an artist “beyond category”; Bill Milkowski has described her as “a true jazz original.” Website: www.janeirabloom.com