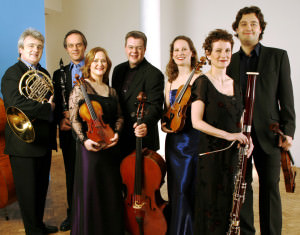 The Nash Ensemble has built up a remarkable reputation as one of Britain's finest and most adventurous chamber groups. The repertoire is vast, and the imaginative, innovative, and unusual programs are as finely architectural as the beautiful Nash terraces in London from which the group takes its name. The Nash Ensemble performs with equal sensitivity and musicality works of Mozart to the avant garde. An impressive collection of recordings illustrates the same varied and colorful combination of classical masterpieces, little-known neglected gems, and important contemporary works. The Ensemble's most recent releases include recordings of Mozart's piano quartets, Brahms's string sextets and chamber works by Richard Strauss. In addition, the Group has been involved in a contemporary music series for Black Box Records, including chamber works by James MacMillan and Mark-Anthony Turnage. A vocal and chamber music disc by Birtwistle has also received much critical praise, including a Grammy nomination. The Nash's Teldec recording with the Arditti Quartet and soprano Claron McFadden of Birtwistle's Pulse Shadows won a Gramophone Award in the contemporary music catagory. The Nash Ensemble tours frequently throughout Europe, the USA, South America, Australia and Japan and appears at many music festivals and media stations.