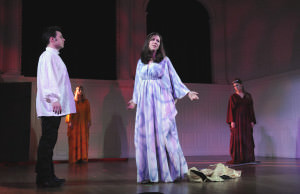 La Navarraise, inspired by Jules Claretie’s short story "La cigarette," takes place in Spain during the Carlist War in 1874. It is the tale of Anita (La Navarraise) who, in order to raise money for a dowry to marry the man she loves, assassinates a Carlist leader for the reward money — with tragic results. In The Bear, based on a vaudeville by Anton Chekhov, a landowner heatedly demands money owed from a widow, but their duel turns into a seduction. Both operas feature the work of veteran stage director Vera Lúcia Calábria, with wardrobe by Martha Lehr and lighting by William Warfel. La Navarraise will be performed in French with projected English translations; The Bear will be performed in English with text projections. Douglas Dickson and Timothy Shaindlin provide musical direction and piano accompaniment for the Massenet and the Walton, respectively.