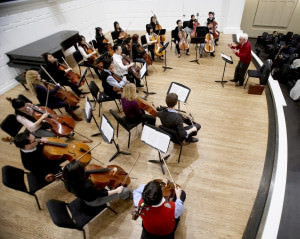 The Yale School of music celebrates Professor Aldo Parisot’s fifty years on the faculty with a concert featuring the Yale Cellos on Monday, April 20 at 8:00 p.m. in Morse Recital Hall in Sprague Hall (470 College St, New Haven). In his astonishing career, Aldo Parisot has been a star soloist, renowned chamber player, and perhaps the most beloved cello teacher of his time. The concert will showcase the famed Yale Cellos, founded by Parisot in 1983, whose 20 or so members belong to the select group of international young artists invited to study with him at Yale. Joining the ensemble are pianist Elizabeth Parisot and soprano Hyunah Yu.

The concert is a preview of the ensemble's performance in Zankel Hall at Carnegie Hall on Tuesday, April 21, 2009, as part of the Yale in New York series.

The program opens with Bachianas Brasileiras No. 1 for cello ensemble and No. 5 for cellos and soprano by Heitor Villa-Lobos, a close friend of Mr. Parisot’s. Following the Villa-Lobos is a performance of Rapturedux by Christopher Rouse, which Mr. Parisot famously conducted at the Manchester International Cello Festival with an ensemble of 147 cellists in 2001, and which he premiered in New York with the Yale Cellos in 2003. The  concerts also include the New York premieres of two works by jazz great Dave Brubeck, Elegy and The Desert and the Parched Land as well as the New York premiere of  Simões by Ezra Laderman (Simões being, not coincidentally, Mr. Parisot’s middle name), and David Popper’s Requiem in the New York premiere of the arrangement for 20 cellos and piano.

ABOUT ALDO PARISOT
“As a teacher, he is an object of pilgrimage.” — New York Magazine

Aldo Parisot’s accomplishments as a performer, teacher, and advocate for his instrument are extraordinary, even among the luminaries who make up the faculty at the Yale School of Music.  His career has spanned seven decades, and he has appeared with many of the major orchestras of the world under such conductors as Stokowski, Barbirolli, Bernstein, Mehta, Monteux, Sawallisch, Hindemith, and Villa-Lobos.

Mr. Parisot has played a crucial role in expanding the repertoire for the cello, premiering works written especially for him by Carmago Guarnieri, Quincy Porter, Joan Panetti, Yehudi Wyner, and Heitor Villa-Lobos, among many others.  He premiered the Cello Concerto No. 2 by Villa-Lobos in his New York Philharmonic debut, and created a sensation at the 1964 Tanglewood Festival with his premiere of Donald Martino’s Parisonatina al’Dodecafonia for solo cello.

Born in Natal, Brazil, Mr. Parisot began studying the cello at age seven with his stepfather, Tomazzo Babini, and made his professional debut at age twelve.  He came to the United States in 1946 and made his debut with the Boston Symphony Orchestra at Tanglewood.  Along with his career as a soloist, he was a member of the Yale String Quartet and the creator of the internationally renowned Yale Cellos.  Mr. Parisot has served on the faculties of Juilliard, Peabody, Mannes, and the New England Conservatory of Music, but he is best known for his long and distinguished career at Yale.

Mr. Parisot joined the faculty at Yale in 1958, twelve years after arriving in the U.S.  As a teacher, Mr. Parisot based his philosophies on the methods of the great cellist Emanuel Feuermann, believing that unnecessary tension will always prevent a cellist from achieving perfect technical ease and musical expression.  His masterclasses are legendary.

Formed in 1983 by Aldo Parisot, the Yale Cellos have earned an international reputation for successful recordings, richness of sound, virtuosity, and their many additions to the cello ensemble literature.  In addition to annual concerts at Yale University, the ensemble has performed twice at Weill Recital Hall in Carnegie Hall, and at cello festivals in France and England.  In May of 2005, Mr. Parisot and the Yale Cellos toured Korea to great acclaim.  The Yale Cellos under Mr. Parisot may be heard on the recording Cellists from Yale issued in Brazil by Phonodisc, and The Yale Cellos Play Favorites, issued by Delos International.  Their disc Bach/Bachianas, also issued on Delos, received a Grammy nomination in 1988.  The ensemble has recorded a CD for Albany Records of the music of Ezra Laderman, Three Works Written for Aldo Parisot.  Their CD L’art du violoncelle was released by Calliope Records.  Cello, Celli, their most recent CD, released by Naxos in 2006, features works by J.S. Bach and Dave Brubeck.

Elizabeth Parisot, pianist, received her DMA from the Yale School of Music in 1973 and has served on the faculty of the School since 1977. She has appeared in solo and chamber music concerts throughout the world, performing at such prestigious venues as Carnegie Hall and Alice Tully Hall in New York, the Kennedy Center and the National Gallery in Washington, D.C., Queen Elizabeth Hall in London, the Hispanic Institute in Madrid, and the Jerusalem Music Center in Israel.

With her husband, Brazilian cellist Aldo Parisot, she has toured extensively, joining him in sonata performances as well as in chamber music with other renowned artists. She served as coordinator and performing artist at the Aldo Parisot International Competitions and Courses in Brazil for several years and has also been a guest artist at the International Music Institute in Santander, Spain; the Banff Festival of the Arts in Alberta, Canada; and the Norfolk Chamber Music Festival. Recent tours have included concerts in Korea and Italy with violinist Kyung Hak Yu and performances with faculty colleagues Erick Friedman and Aldo Parisot in Taiwan. She has also performed recently with Yo-Yo Ma, Janos Starker, and Ralph Kirshbaum. A collaborative artist with cellists for many years in concerts, master classes, and competitions worldwide, Ms. Parisot was awarded the title Grande Dame du Violoncelle in 2007 by the Eva Janzer Memorial Cello Center at Indiana University “in recognition of her universal contributions to the art of cello playing and cellists.”

Elizabeth Parisot has numerous recordings to her credit, including the two Brahms sonatas for cello and piano with her husband Aldo Parisot (Musical Heritage Society); music by Leo Ornstein and Alexei Haieff for cello and piano with Italo Babini (Serenus); Cellists from Yale issued in Brazil (Phonodisc); the Yale Cellos of Aldo Parisot and The Yale Cellos Play Favorites (Delos); three CDs with Queen Elizabeth Competition winner Nai-Yuan Hu; a disc with cellist Carol Ou;  music by Ezra Laderman with violinists Erick Friedman and Kyung Hak Yu and cellist Pansy Chang (Albany Records); and works by Strauss and Prokofiev with violinist Kyung-Hak Yu.

An American citizen born in South Korea, Hyunah Yu earned the prestigious Artist Diploma from the Peabody Conservatory of the Johns Hopkins University, Baltimore. Her mentors include soprano Benita Valente, Blanche Moyse, vocal coach Thomas Grubb, and Bill Brody, the president of the Johns Hopkins University. Hyunah Yu’s star has risen quickly since her 1999 appearance in the St. Matthew Passion with the New England Bach Festival. Since 2000 she has been a regular at the Marlboro Music Festival. Her promise was confirmed in 2003 when, nominated by Mitsuko Uchida, she was given an award by the Borletti-Buitoni Trust.

Highlights of the 2007-8 season included the Bach B-Minor Mass with the Milwaukee Symphony Orchestra, Mozart’s C-Minor Mass with the Bournemouth Symphony Orchestra, Britten’s Les Illuminations with the Peabody Symphony Orchestra, a return to the Chamber Music Northwest Festival, a recital tour of Korea, including her debut solo recital in Seoul at the LG Arts Centre and summer a welcome return to the Marlboro Music Festival. Future plans include Haydn and Mozart for Boston Baroque, conducted by Martin Pearlman, in April and May 2009 and concerts at the Festspiele Mecklenburg with Viviane Hagner.
FOR CALENDAR EDITORS