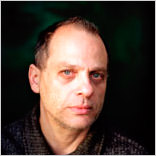 David Lang, renowned as the winner of the 2008 Pulitzer Prize in Music, is the featured faculty composer in the next New Music New Haven concert on Thursday, April 30 at 8:00 pm in Morse Recital Hall in Sprague Memorial Hall. The world-renowned Yale Percussion Group will perform music by Lang, who was appointed to the Yale School of Music faculty in the fall of 2008. Other works on the program cover a broad range of media and thematic content, from Timo Andres’s Fast Flows the River for MIDI keyboard and cello, to Richard Harrold’s Two Studies for Guitar Duo. Themes of water and ice are explored in Naftali Schindler’s Water Tropes for string quartet, sampler, and Tuvan throat singer, and in Ted Hearne’s THAW for percussion quartet, a piece that imagines the sensation of being immersed in a block of ice.

About the featured faculty composer

The music of David Lang has been performed by major musical, dance, and theatrical organizations throughout the world, including the Santa Fe Opera, New York Philharmonic, San Francisco Symphony, Cleveland Orchestra, Kronos Quartet, Nederlands Dans Theater, and the Royal Ballet, and has been performed in the most renowned concert halls and festivals in the United States and Europe. Lang is well known as co-founder and co-artistic director of New York's legendary Bang on a Can festival. In 2008, Lang was awarded the Pulitzer Prize in Music for The Little Match Girl Passion, commissioned by Carnegie Hall for Paul Hillier’s vocal ensemble, Theater of Voices. He has also has been honored with the Rome Prize, the BMW Music-Theater Prize (Munich), a Kennedy Center/Friedheim Award, the Revson Fellowship with the New York Philharmonic, a Bessie Award, a Village Voice OBIE Award, and grants from the Guggenheim Foundation, the Foundation for Contemporary Performance Arts, the National Endowment for the Arts, the New York Foundation for the Arts, and the American Academy of Arts and Letters. His work is recorded on the Sony Classical, Teldec, BMG, Point, Chandos, Argo/Decca, Caprice, Koch, Albany, CRI and Cantaloupe labels. David Lang holds degrees from Stanford University and the University of Iowa, and received his DMA from the Yale School of Music in 1989. He has studied with Jacob Druckman, Hans Werner Henze, and Martin Bresnick. His music is published by Red Poppy (ASCAP) and is distributed worldwide by G. Schirmer, Inc.

With the Yale Percussion Group and other performers from the Yale School of Music.