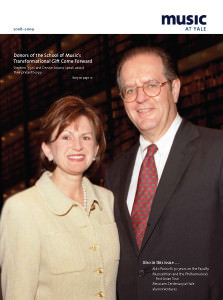 The Yale School of Music's annual publication, Music at Yale, has released its first online issue.  The 2008-09 issue of the magazine highlights Denise and Stephen Adams, donors who have transformed the Yale School of Music with their generosity. An article by Susan Hawkshaw traces the career of the legendary Aldo Parisot, who this year celebrates his fiftieth year on the School of Music faculty.

Other featured news items include the Philharmonia's first tour of Asia in July 2008, the new alumniVentures program, the 2008 Norfolk Chamber Music Festival, the Messiaen Centenary Celebration in December 2008, and announcements of events such as the 2009 Symposium on Music in Schools and the new Yale Institute for Music Theatre. As in previous issues, the magazine also includes student, alumni, and faculty news, music briefs, and many other items about the Yale School of Music.