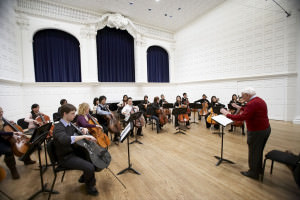 In anticipation of the Yale Cellos' upcoming performances, a variety of newspapers have published stories about Aldo Parisot and the ensemble he founded back in 1983. Now celebrating his fiftieth year on the faculty of the Yale School of Music, Parisot leads the Yale Cellos in two concerts this week – tonight in New Haven and tomorrow in New York.

Tonight's concert in Sprague Hall is already sold out, although a small number of tickets may be available at the door. Limited numbers of tickets are still available to tomorrow's performance in Zankel Hall at Carnegie Hall.

Read about the Yale Cellos and Aldo Parisot in:

In addition, Tuesday's concert in Carnegie Hall is listed as a Critics' Pick in Time Out  New York and New York Magazine.