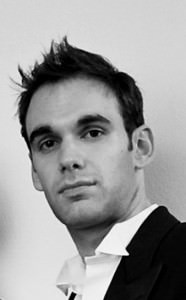 Nicholas DiEugenio ’08AD has been appointed Assistant Professor of Violin at the Ithaca College School of Music. The position is tenure-track and begins this August.

Praised by the Cleveland Plain Dealer for his "invigorating, silken" playing and "mysterious atmosphere," violinist Nicholas DiEugenio leads a versatile musical life as a multi-faceted performer of composers from Buxtehude to Carter. This year's projects include concerts at Town Hall in Seattle and Merkin Hall in New York, as well as concerts at the Chamber Music Society of Lincoln Center. Recently, Mr. DiEugenio performed Ezra Laderman's Violin Duets in Weill Recital Hall (Carnegie Hall) along with violinist Katie Hyun. He has premiered chamber works by composers Yevgeniy Sharlat, Matthew Barnson, and Timo Andres at Yale, as well as at Roulette in New York, and by Stephen Gorbos at Cornell.

As a guest artist, Mr. DiEugenio has visited the University of Arkansas, giving both a recital and masterclass, and has performed as soloist with the Cleveland Bach Conosort, National Repertory Orchestra, Cleveland Pops, CIM Orchestra, and Interlochen's World Youth Symphony Orchestra. A prizewinner at the Fischoff National Chamber Music Competition, DiEugenio was a founding member of the Biava Quartet, and has also been the first violinist of the iO Quartet in New York and a member of the Lorien Trio in New Haven. Mr. DiEugenio has also served as concertmaster of the National Repertory Orchestra, Cleveland Bach Consort, the Cleveland Institute of Music Orchestra, Yale Philharmonia, and the Mimesis Ensemble.

A member of the violin faculty of the ENCORE School for Strings in the summers, Mr. DiEugenio currently teaches undergraduate students at Yale. He holds degrees from the Cleveland Institute of Music (BM, MM ’05), where he studied with David Cerone, Linda Cerone, and Paul Kantor, and from the Yale School of Music (Artist Diploma ’08), where he continues to pursue a DMA as a student of Ani Kavafian.