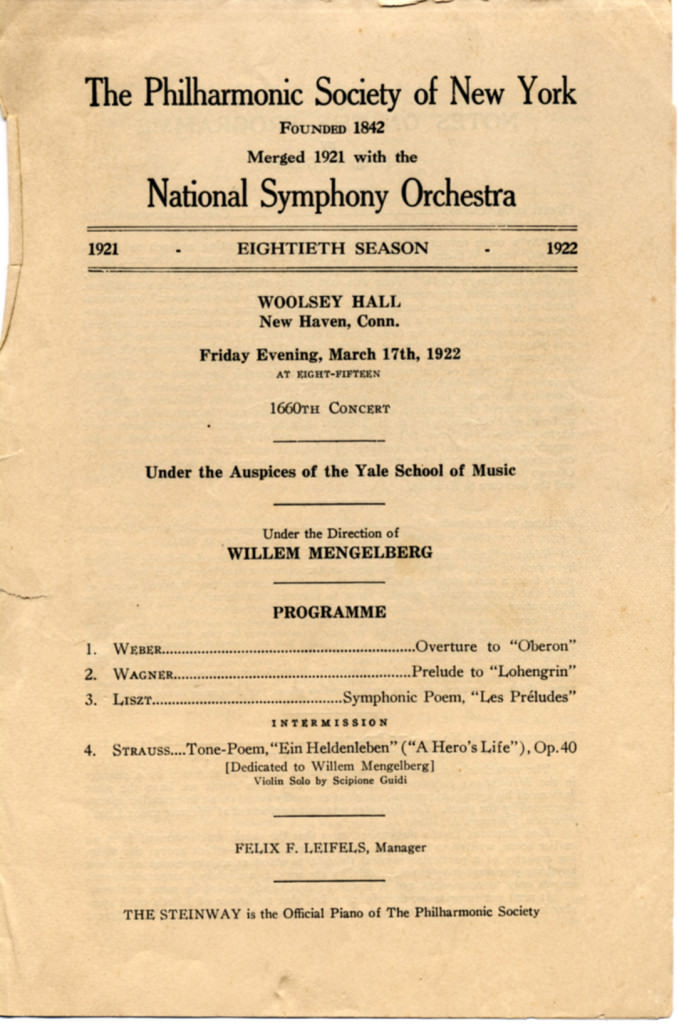 In 1922, the Philharmonic Society of New York – which would later call itself the New York Philharmonic – performed at Yale. It was the orchestra's 1660th concert and fell in their eightieth season. A year previously, the Philharmonic had merged with the New York-based National Symphony Orchestra (not the same organization as the ensemble of the same name based in Washington, DC). The orchestra played in Woolsey Hall, which is still Yale's primary venue for orchestral performances.

Willem Mengelberg, who was the Philharmonic's music director from 1922 to 1928, conducted the program of Weber, Wagner, Liszt, and Strauss. Mengelberg is still remembered for his interpretation of Strauss' Ein Heldenleben, which comprised the second half of the concert; he recorded that work with the Philharmonic in 1928.

New York-based critic Lawrence Gilman wrote the program notes, as he did for the orchestra from 1919 to 1939. Gilman wrote for such outlets as the New York Herald (1896-98), Harper's Weekly (1901-13), the North American Review (1915-23), and the Herald Tribune (from 1925 until his death in 1939). He was also the author of several books, including guides to such music as Strauss's Salome, Debussy's Pelleas et Melisande, and Wagner's operas. He also annotated programs for the Philadelphia Orchestra (1921-1939) and provided radio commentary for Toscanini's broadcasts (1933–5).