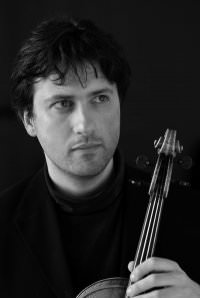 The Yale School of Music announces with pleasure the appointment of Ettore Causa as Associate Professor (Adjunct) of Viola. Mr. Causa will join the faculty in September.

Since 2001, Mr. Causa has served as professor of viola and chamber music at the International Menuhin Music Academy in Switzerland, and he regularly presents master classes throughout Europe and South America. Additionally, he is a member of the Aria Quartet, with whom he performs throughout the world. Mr. Causa studied at the International Menuhin Academy with Sir Yehudi Menuhin, Johannes Eskar, and Alberto Lysy. His advanced studies were with Michael Tree at the Manhattan School of Music.

Immediately following his studies, Mr. Causa was appointed as the First Solo Viola of the Carl Nielsen Philharmonic in Denmark and was also leader of the Copenhagen Chamber Soloists. In 2000, he was awarded both the Schidlof Prize and the J. Barbirolli Prize at the prestigious Lionel Tertis International Viola Competition in England.

Since then, he concertizes in major artistic capitals of the world and has performed in notable venues such as Victoria Hall (Geneva), Salle Cortot (Paris), Teatro Colon (Buenos Aires), Tokyo and Osaka Symphony Halls, and the Zurich Tonhalle. He regularly performs at major festivals, such as Salzburg, Tivolli, Perth, and Festival de Estorial (Portugal).

In announcing the appointment, which followed a long international search, Dean Robert Blocker expressed his deep appreciation to members of the search committee and the faculty who gave unselfishly of their time throughout this process. He also thanked the students in the viola studio who participated in the master classes and who made measurable contributions to the School during this past year.

Mr. Causa will join the School of Music for Opening Week festivities in September.