Dean Robert Blocker announced today the appointment of Paul Hawkshaw as Deputy Dean of the School of Music.  Professor Hawkshaw has served the School and University with distinction for twenty-five years, a tenure that has included eleven years as Associate Dean and two years as Acting Dean.  He will continue his responsibilities as Director of the Norfolk Chamber Music Festival and Yale Summer School of Music, a position he has held since 2003. 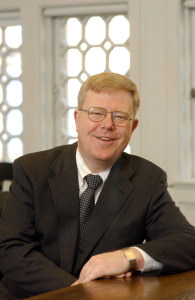 Paul Hawkshaw received his Ph.D from Columbia University and his faculty appointment at the School of Music in 1984.  He is now Professor in the Practice of Music History and in this role has guided many YSM students through their MMA programs.  His experience and institutional memory will be instrumental in the discussions and implementation of Beyond Boundaries, the School’s strategic plan.

Recognized throughout the world as a leading authority on the music of Anton Bruckner, Professor Hawkshaw’s publications include seven volumes of the composer’s Collected Works Edition (Vienna), most recently a new score and critical study of the composer’s Mass in F Minor.  He served as co-author of Bruckner Studies (Cambridge University Press, 1997), Perspectives on Anton Bruckner (Ashgate, 2001), and he wrote the Bruckner biography for The New Grove Dictionary of Music and Musicians. In 1996 Professor Hawkshaw delivered the commemorative address in the Austrian National Library, Vienna, celebrating the centennial of Bruckner’s death.

Since coming to Yale, Professor Hawkshaw has taken an active interest in community affairs and public education in New Haven. He worked with the New Haven Board of Education, Yale faculty, staff, and students, and the Yale College Class of 1957 to establish a music and literacy program in the city’s public schools. His efforts were publicly recognized by an official proclamation of Mayor John DeStefano and, in the Spring of 2000, he was awarded the Yale School of Music’s highest honor, the Samuel Simons Sanford Medal, for his scholarship and community service.  In addition to his musical and educational interests, Paul is currently a volunteer lay member of the Client Security Fund Committee of the State of Connecticut Judicial Branch.

Said Dean Blocker, "We are fortunate to have a colleague of Paul’s stature assume these responsibilities, and I look forward to his leadership and to our work together." Deputy Dean Hawkshaw will begin his new role immediately.