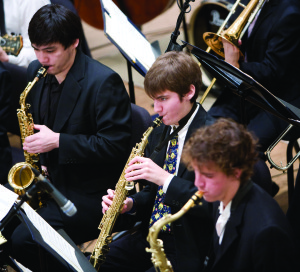 Yale’s Celebrating the King of Swing: A Festival for Benny Goodman’s 100th Birthday will conclude with a big band concert on Tue, Sep. 29 at 8 pm in Sprague Hall, featuring arrangements that made Goodman one of the most popular musicians of all time.

Thomas C. Duffy will direct the Yale Jazz Ensemble and clarinetist Vincent Oneppo in an exciting program called Bigger Than Life: The Big Band Music of Benny Goodman. The authentic arrangements – including many of Goodman’s signatures, like “Let’s Dance,” “Don’t Be That Way,” and “Sing, Sing, Sing” – were selected from the Benny Goodman Archives in the Gilmore Music Library at Yale. They include music by the great Fletcher Henderson and other legendary composers associated with New Haven and Yale, including Mel Powell and Cole Porter.

General admission tickets to Bigger Than Life: The Big Band Music of Benny Goodman are only $10, $5 students. For more information and to buy tickets, visit the Yale School of Music website or call 203 432-4158. 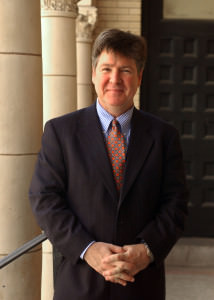 Director of Bands Thomas C. Duffy and clarinetist Vincent Oneppo have collaborated many times in past years, including other tributes to Benny Goodman. With the Flipside Jazz Orchestra, an ensemble of Yale School of Music faculty and alumni, they performed arrangements from the Goodman archive of songs by George Gershwin and later presented a program called “Benny Meets the Duke,” featuring big band arrangements from the libraries of Duke Ellington and  Benny Goodman. Oneppo was also the featured clarinet soloist with Duffy and the Yale Concert Band in several recreations of Glenn Miller’s Woolsey Hall concerts and in the band’s tour of France and England. With Professor Willie Ruff he was soloist in two concerts of music from the Goodman archive as part of the Duke Ellington Jazz Series.

The Yale Jazz Ensemble, a seventeen-piece big band, performs a wide variety of music, from pieces in the Benny Goodman archive to the newest, most progressive jazz compositions. The ensemble has performed in the United States and internationally at such noted venues as New York's Village Vanguard and Iridium Jazz Club and London's Ronnie Scott's. The YJE has played with or opened for the Mingus Big Band, the Mel Lewis Jazz Orchestra, the Toshiko Akiyoshi/Lew Tabackin Big Band, the World Saxophone Quartet, Jane Ira Bloom, Jimmy Owens, and Branford Marsalis.