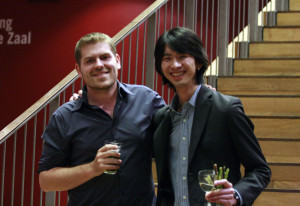 Hearne received the prize for selected movements from Katrina Ballads, a composition performed on September 10 at the Conservatory of Amsterdam by the ensemble ‘de ereprijs’ conducted by Wim Boerman. Hearne himself was the soloist as singer. There was also an honorable mention for Toru Nakatani of Japan, whose 16_1/64_1 was performed on September 9 by Ensemble of the Conservatory of Amsterdam conducted by Jos Zwaanenburg.

The International Gaudeamus Music Week is an activity of Music Center the Netherlands.

Ted Hearne is a composer, conductor, and performer of new music in New York. Hearne’s music has been performed by the Minnesota Orchestra, The Knights, Third Coast Percussion, and New York City Opera. He is Artistic Director of Yes is a World Ensemble, resident conductor of Red Light New Music, and performs regularly with his band Your Bad Self. His music can be found on New Amsterdam Records. Hearne worked as music director for premieres of David Lang’s Anatomy Theater and Michael Gordon’s Lightning at our Feet. In the fall of 2009 he will be conducting the American premiere of Constantine Koukias’ Prayer Bells with Opera IHOS and the world premiere of a new ballet by Bryan Senti. Ted has received the Charles Ives Scholarship from the American Academy of Arts and Letters, the ASCAP Morton Gould Award, and has participated in the 2008 Minnesota Orchestra Composer Institute and the Volti Choral Arts Laboratory. He has attended both the Manhattan School of Music and the Yale School of Music. Upcoming commissions include a trumpet concerto for Christopher Coletti and the Huntsville Symphony Orchestra, works for Albany Symphony and DITHER electric guitar quartet, and a 15-minute work for the combined forces of Yale Glee Club and Yale Symphony Orchestra.