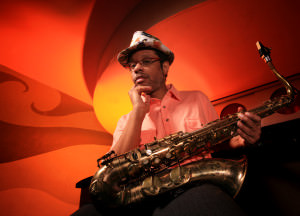 The Yale School of Music will present the versatile talents of clarinetist/saxophonist Don Byron and his jazz quartet on Thursday, September 24 at 8 pm in Morse Recital Hall in Sprague Hall (470 College Street, New Haven). Byron, known for his work in jazz and classical as well as klezmer, salsa, hip-hop, and many other genres, will be joined by Bryan Carrott, vibraphone; Kenny Davis, bass; and Eric Harland, drums. The quartet will play music associated with Benny Goodman, including the famous "From Spirituals to Swing" Carnegie Hall concert. Part of the Ellington Jazz Series directed by Willie Ruff, this concert is also the second event in the week-long Celebrating the King of Swing: A Festival for Benny Goodman’s 100th Birthday.

Don Byron says, “Benny Goodman is an integral part of the pedagogy and history of the clarinet. His sound and approach to the instrument still spark controversy today, and many of the classical masterworks of the twentieth century were written for him. I am honored to play a concert in this celebration of his legacy.”

Tickets to the concert are $20 to $30, $12 for students. On October 16, the Ellington Series will present A Saxophone Summit, a concert featuring six renowned saxophonists, and patrons who purchase tickets to both events save up to $10. For more information, visit the Yale School of Music website, music.yale.edu, or call 203 432-4158.

About Don Byron
For almost two decades, Don Byron has been a singular voice in an astounding range of musical contexts, exploring widely divergent traditions while continually striving for what he calls “a sound above genre.” As clarinetist, saxophonist, composer, arranger, and social critic, he redefines every genre of music he plays, be it classical, salsa, hip-hop, funk, rhythm & blues, klezmer, or any jazz style from swing and bop to cutting-edge downtown improvisation. He has been consistently voted best clarinetist by critics and readers alike in leading international music journals since being named Jazz Artist of the Year in 1992 by Down Beat. Byron has presented a multitude of projects at major music festivals around the world, including recent performances in Vienna, San Francisco, Hong Kong, London, Monterey, New Zealand, Australia, and on Broadway. Born and raised in the Bronx, Byron studied classical clarinet with Joe Allard while playing and arranging salsa numbers for high school bands on the side. He later studied with George Russell in the Third Stream Department of the New England Conservatory of Music and performed with Latin and jazz ensembles. His artistic collaborations include performances and recordings with Mario Bauza, the Duke Ellington Orchestra, Cassandra Wilson, Reggie Workman, Steve Coleman, Living Colour, Mandy Patinkin, the Bang On A Can All-Stars, Medeski Martin & Wood, Carole King, Daniel Barenboim, the Atlanta Symphony, Paul Auster, Meshell Ndegeocello, Allen Toussaint, and many others. Byron was recently awarded the prestigious Rome Prize for Composition, and his composition Seven Etudes for Solo Piano was nominated as a finalist for the 2009 Pulitzer Prize in music.

Celebrating the King of Swing: a Festival for Benny Goodman’s 100th birthday
Yale’s celebration of the centenary of legendary clarinetist Benny Goodman is rooted in the university’s close connection to the great clarinetist. Perhaps Goodman’s earliest connection to Yale was with the great Mel Powell who, after working with Goodman as a teenager, playing with Glenn Miller during the war, and working in Hollywood in the late 1940s, came to Yale to study with Paul Hindemith. Goodman became friends with Keith Wilson, Yale's clarinet professor from 1946 to 1987; he and his daughter, a pianist, played chamber music concerts with Yale cello professor Aldo Parisot; and in the 1980s, the School's Dean, Frank Tirro, who was both a clarinetist and an authority on the history of jazz, established a warm relationship with Goodman. In those years Goodman performed several times at Yale. In 1982, Yale conferred an honorary Doctor of Music degree upon Goodman and the School of Music awarded him the prestigious Sanford Medal in 1985. Benny Goodman chose Yale to be the custodian of his extensive archive, and in 1986, the musical arrangements and recording masters of pieces played by Goodman were bequeathed to the Yale University Music Library. In the years that followed, Yale licensed and received revenues from about 25 hours of Goodman performances that had never been commercially released. Material from the Goodman archives has been performed several times in Yale concert halls, with Yale faculty, students, and guest artists playing arrangements by Fletcher Henderson, Tadd Dameron, Eddie Sauter, Mel Powell, and many other greats.

Throughout the week there will be highlights from the Benny Goodman archives on display at the Gilmore Music Library.