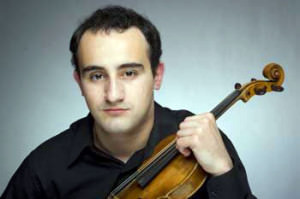 Igor Pikayzen captured first prize in the Tadeusz Wronski International Competition for solo violin, held this week in Warsaw, Poland. "I am ecstatic that my first trip as a Yale student has been such a successful one," Pikayzen said. Pikayzen is a first-year student at the Yale School of Music, where he studies with Syoko Aki.

"The Tadeusz Wronski International Competition for solo violin is the only violin tournament of its kind in the world," says Slawomir Tomasik, the competition's secretary. "To many musicians and music scholars, the competition is particularly significant because of the invariably high levels at which its participants perform. Winners of past editions of this competition are today outstanding violin virtuosos, renowned within their own countries and beyond." The competition was first held in Warsaw in January, 1990.

Igor Pikayzen was born in Moscow to a very musical family. He started his studies at the age of five under his grandfather, violinist Viktor Pikayzen. At the age of eight, Igor gave his solo debut with Mozart's Concerto No. 2 and by the age of twelve had already performed with orchestras such as the Moscow Radio Symphony, the Ankara Philharmonic, Moscow Chamber Orchestra, and others. In 1999 Igor moved to the USA to study at the Manhattan School of Music with Keng-Yuen Tseng. He then studied with Stefan Milenkovich and Stephen Clapp as a full scholarship student at the Juilliard School. By the time he finished his Bachelor's Degree, he has amassed numerous accolades and awards, such as first prizes in competitions in Manhattan, Massachusetts,  Ridgefield, and Greenwich, as well as prizes at the Kloster-Schontal International Competition in Germany and the Lipizer International Competition in Italy. Igor also had the honour of giving recitals and performances in halls such as the Small Hall and Tchaikovsky Hall in Moscow, the Presidential Hall in Istanbul, the Royal Conservatory Hall in Brussels, Paul Hall and Alice Tully Hall in New York, and others.