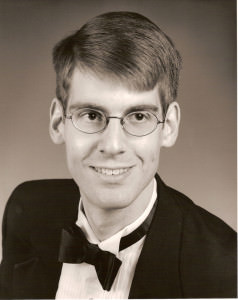 The organist Brian Harlow, director of music at St. Peter’s Episcopal Church in Morristown, NJ, will perform a recital on the celebrated Newberry Memorial Organ in Yale’s Woolsey Hall on Thursday, October 22, 2009 at 8pm. The program will open with J.S. Bach’s Toccata in C major, BWV 564. It continues with Mytò, written in 1981 by the Dutch composer Ad Wammes, and Herbert Howells’s De profundis clamavi ad te, Domine (Ps. 130:1) from the Psalm-Preludes. The most recent work on the program is the 2002 Toccata for Organ by the American composer Gerre Hancock. The recital, one of the final requirements for the Doctor of Musical Arts degree from the Yale School of Music, will conclude with Charles-Marie Widor’s masterpiece for the organ, the Symphonie Romane, Op. 73.

Brian Preston Harlow is the director of music and organist at St. Peter’s Episcopal Church in Morristown, NJ, where he directs six choirs and coordinates the highly acclaimed Music at St. Peter's concert series. Previously, Mr. Harlow was the interim director of music at First United Church of Christ in Milford, Connecticut. He has also served two prominent churches in Manhattan: as Associate Organist at St. James’ Church, Madison Avenue, and as the last Assistant Organist to serve under the leadership of Gerre Hancock at Saint Thomas Church, Fifth Avenue. Mr. Harlow holds the Master of Musical Arts degree and the Master of Music degree from the Yale School of Music, and the Bachelor of Music degree with High Distinction from the Indiana University School of Music. He received the Faculty Prize of the Yale Institute of Sacred Music for exemplifying the ideals of the Institute. Mr. Harlow also attended Eton College as an International Scholar and Groton School, where he served as interim Organist and Choirmaster for the 2001-2002 academic year. He has given a number of recitals in the United States and England and is an Associate of the American Guild of Organists.