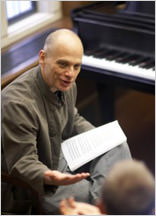 The Yale School of Music presents a concert of new music for orchestra, performed by the Yale Philharmonia under the direction of Shinik Hahm, on Friday, December 11 at 8 pm in Woolsey Hall. The concert highlights two works by David Lang: International Business Machine and Grind to a Halt.

International Business Machine, subtitled “an overture for Tanglewood,” was written for the Boston Symphony Orchestra. The Boston Globe called the piece “a brisk, elegantly-fashioned work depicting today’s post-industrial computer age.” Grind to a Halt is dedicated to the memory of Jacob Druckman, Lang’s composition teacher and a longtime member of the Yale School of Music faculty. According to Lang, “One of the things that interests me very much is how certain mechanical musical tasks force players – and listeners – into a kind of concentration that can be spellbinding. The intense concentration necessary to coordinate the ensemble in Grind to a Halt is a kind of virtuosity in itself.”

Lang, who won the 2008 Pulitzer Prize in Music, has said: “The world needs happy tunes. But for me, the interesting ideas are where those happy tunes aren’t. The interesting things are in the dark places, or in the ugliness, or in the noise or the grit.” Listen to audio samples of both Lang pieces at www.davidlangmusic.com.

Admission to the concert is free. For more information or to hear a live stream of the concert, visit the Yale School of Music website.

About the featured composer

The music of DAVID LANG has been performed by major musical, dance, and theatrical organizations throughout the world, including the Santa Fe Opera, New York Philharmonic, San Francisco Symphony, Cleveland Orchestra, Kronos Quartet, Nederlands Dans Theater, and the Royal Ballet, to name a few. Lang is well known as co-founder and co-artistic director of the legendary Bang on a Can music festival. In 2008, Lang was awarded the Pulitzer Prize in Music for The Little Match Girl Passion, commissioned by Carnegie Hall. He has also has been honored with the Rome Prize, the BMW Music-Theater Prize (Munich), a Kennedy Center/Friedheim Award, the Revson Fellowship with the New York Philharmonic, a Bessie Award, a Village Voice OBIE Award, and grants from the Guggenheim Foundation, the Foundation for Contemporary Performance Arts, the National Endowment for the Arts, the New York Foundation for the Arts, and the American Academy of Arts and Letters. His work is recorded on the Sony Classical, Teldec, BMG, Point, Chandos, Argo/Decca, Caprice, Koch, Albany, CRI and Cantaloupe labels. David Lang holds degrees from Stanford University, the University of Iowa, and the Yale School of Music. His music is published by Red Poppy (ASCAP) and is distributed worldwide by G. Schirmer, Inc. David Lang joined the Yale faculty in 2008.