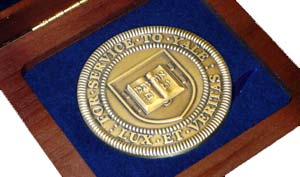 Among the recipients of this year’s Yale Medal is Stephen Adams ’59, a member of the School of Music’s Board of Visitors and a donor whose generosity has transformed the School. The medal will be awarded tonight at the annual Yale Medal dinner.

Inaugurated in 1952, the Yale Medal is the highest award presented by the Association of Yale Alumni and is conferred solely to recognize and honor outstanding individual service to the University. Since its inception, the Yale Medal has been presented to 272 individuals, all of whom not only showed extraordinary devotion to the ideals of the University, but also were conspicuous in demonstrating their support of Yale through extensive, exemplary service on behalf of Yale as a whole or one of its many schools, institutes, or programs.

At tonight's dinner, the Association of Yale Alumni (AYA) will honor a total of five people with the Yale Medal. In addition to Mr. Adams, the recipients are Frances Beinecke ‘71, ‘74 MFS, Charles D. Ellis ‘59, Justice Carlos R. Moreno ‘70, and Eve Hart Rice ‘73.

Stephen Adams, long a loyal and active volunteer, has demonstrated enduring devotion and uncommon generosity to his alma mater. While his commitments extend well beyond his Yale College class to a broad range of initiatives throughout the university, it is his sense of vision and purpose that has transformed in particular the School of Music. Adams’ gift to that school — enabling all future generations of students to attend tuition-free — has redefined the role of music at Yale, and will in turn redefine arts education throughout the world. Adams serves on the Board of Visitors to the School of Music, the University Council and as a Sterling Fellow.