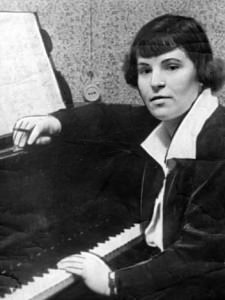 The New York Times reviewed the concert, noting that "the Fifth House performers, augmented by players from the Yale School of Music, played with enough conviction, authority and finesse to bring out the defiant dignity and nobility in Ustvolskaya’s truculent creations."

About the composer (excerpts from the program notes)

"There is no link whatsoever between my music and that of any other composer, living or dead.” -Galina Ustvolskaya

The statement is just. Galina Ustvolskaya, born in what was Petrograd (now St. Petersburg) in 1919, stood alone. Her music is different, not least, from that of Dmitri Shostakovich, with whom she studied at the conservatory in her home city (by then renamed Leningrad) and with whom she had an intense personal and musical relationship that continued after her graduation in 1947. The fact has gone down in history that Shostakovich quoted a theme from one of her earliest compositions (and one we hear tonight), her Trio for violin, clarinet, and piano of 1949, in his Fifth String Quartet of three years later, and quoted it again, near the end of his life, in his suite setting poems by Michelangelo. What these quotations signify, though, or what they remember, we cannot know. Nor can we know what Ustvolskaya ultimately felt about Shostakovich. Almost anything is possible. Gratitude. Outgrowing. Reverence. Unknowability.

From her 20s to her 50s Ustvolskaya supported herself by teaching at the junior department of the Leningrad Conservatory. Meanwhile, she lived two creative lives. She wrote cantatas, light orchestral pieces, songs, and film scores, all for immediate consumption and all subsequently disavowed. And she wrote the music she wanted to write, almost none of it performed at the time. That 1949 trio had its first performance in 1968. Other works similarly had to wait two decades to be heard, and in the 1960s she virtually gave up writing her “real” music, to start again in the 1970s, when her music was presented more immediately—though still only in the Soviet Union. She was virtually unknown abroad until the early 1990s, when she gained the advocacy of Joel Sachs in the United States, Reinbert de Leeuw in the Netherlands, and Frank Denyer in England. By that time, however, she had ceased composing.

“All my music is ‘spiritual’ in nature.”
This is made explicit in most of the works she wrote after 1970, either by a subtitle from the Latin liturgy (in the case of the three pieces of 1970-75 entitled Composition) or by a sacred text (in the four symphonies that came later). But Ustvolskaya meant the remark to apply also to her compositions of the late 1940s and 1950s; the spirituality was in the sound.