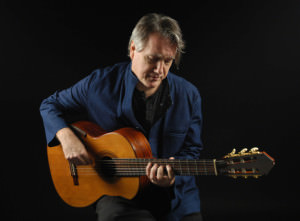 Benjamin Verdery's newest work, Give, premiered October 29 at the Hochschule for Music and Theatre (HMT) in Rostock, Germany. Verdery himself, a faculty member of the Yale School of Music, performed a broad range of music, and several of his compositions were performed by students from the HMT.

In his review of the performance, Heinz-Jürgen Staszak of the Ostsee-Zeitung wrote,

Verdery’s compositional style is both relaxed and refreshing, with influences derived from classical, pop, and other musical genres. And thus played the young guitarists under the direction of Thomas Offermann: with astonishing technical ability, rhythmic precision, impact of sound, and humor, but also with emotion. Though before even hearing these nine, it was clear where all of these things came from, namely, the Meister himself, who first delivered a masterful performance. Verdery played a varied program, drawing elements from the classical canon and the contemporary, and featuring compositions ranging from Albéniz and Janácek to Elvis and Jimi Hendrix in refined arrangements –played with virtuosity and stylistically interpreted. Verdery’s willingness to experiment is highly successful. Then the students played alone, one after another, eleven etudes composed by Verdery. Short virtuoso character pieces, each with a particular technical challenge, gave each student the opportunity to learn a particular artistic element from Verdery, which could then be applied together in the finale, “Give,” which was so successfully presented. Brilliance on 54 strings! Videos of the performances are available for viewing HERE.