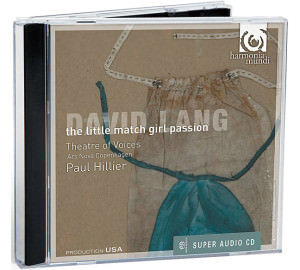 David Lang's The Little Match Girl Passion has already earned him a Pulitzer Prize in Music. Now a recording of the piece on Harmonia Mundi has been nominated for a 2010 Grammy Award. Nominated in the category of Best Small Ensemble Performance, the recording features Ars Nova Copenhagen and the Theatre of Voices, conducted by Paul Hillier. The CD was released in July of 2009. David Lang, a graduate of the School of Music, became a member of the composition faculty in 2008.

Co-commissioned by Carnegie Hall especially for Paul Hillier and Theatre of Voices, The Little Match Girl Passion was awarded the 2008 Pulitzer Prize in Music. The work sets Hans Christian Andersen's fable in the format of Bach's St. Matthew Passion. According to publicity materials for the recording, Lang elevates the suffering of the little match girl with poignant, evocative music.

Lang's piece is scored for four voices and a few percussion instruments, played by the singers. They sing the sad story of a little girl who freezes to death selling matches on the street during a cold winter's night. In notes Lang wrote to accompany the Carnegie Hall premiere last October, he says he was drawn to Andersen's story because of how opposite aspects of the plot played off each other. 'The girl's bitter present is locked together with the sweetness of her past memories, ' Lang says. 'Her poverty is always suffused with her hopefulness. There's a kind of naive equilibrium between suffering and hope.'

The complete list of Grammy nominations is available here.