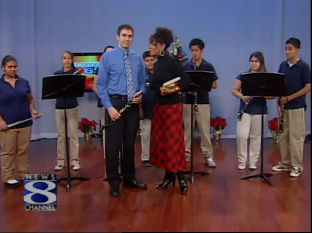 John Miller ’07MM, manager of community programs at the Yale School of Music, and students from the John C. Daniels School in New Haven appeared on a Channel 8 news segment recently. Miller described the program, which began only two years ago and already involves almost 50 students. The program kicked off when the school received 36 instruments from the VH1 Save The Music Foundation. Other instruments, he said, came from teachers at the school and members of the community. The John C. Daniels band students are high achievers. In the 2008-09 academic year, they performed at over 30 concerts, and many of them also study at the Neighborhood Music School.

View the video of the band's WTNH-8 appearance HERE.