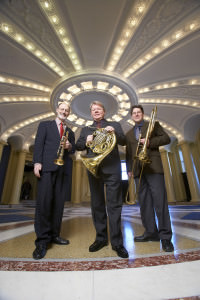 The Yale Brass Trio and guest artists will perform a broadly varied Faculty Artist Recital on Tuesday, February 2, 2010 at 8 pm in Sprague Hall (470 College Street, New Haven). The program will range from the early Renaissance to the twentieth century, with music by the 14th-century composer Guillaume de Machaut as well as the contemporary Argentinian composer Astor Piazzola. Other composers represented on the program are Bach, Schumann, Malcolm Arnold, Robert Nagel, and Alec Wilder. The members of the trio – Allan Dean, trumpet; William Purvis, horn; and Scott Hartman, trombone – are all distinguished performers in their own right as well as faculty members at the Yale School of Music. They will perform with guest artist Mihae Lee, piano, and brass faculty colleague Mike Roylance, tuba.

Allan Dean is Professor of Trumpet (Adjunct) at the Yale University School of Music and currently performs with Summit Brass, St. Louis Brass, and the Yale Brass Trio. He was a member of the New York Brass Quintet for 18 years and freelanced in the New York City concert and recording field for over 20 years. Dean performs and teaches each summer at the Mendez Brass Institute and the Norfolk Chamber Music Festival. He has also appeared at the Speleto and Casals Festivals, the Banff Centre, Orford Arts Centre, Musiki Blekinge (Sweden), Curitiba Music Festival (Brazil), and the Morella Festival (Spain). He can be heard playing both modern trumpet and early brass on over 80 recordings on most major labels. For more information, visit www.allanjdean.com.

Scott Hartman, trombone, joined the Yale faculty in 2001. Mr. Hartman received his B.M. and M.M. degrees from the Eastman School of Music and began his career by joining the Empire Brass Quintet and the Boston University faculty in 1984. As a trombone soloist and with his various chamber groups, Mr. Hartman has taught and played concerts in all fifty states and throughout the world. He regularly performs and records with the Yale Brass Trio, Proteus 7, Millennium Brass, the Brass Band of Battle Creek, and the trombone quartet Four of a Kind. Mr. Hartman spends several weeks each summer in residence at the Norfolk Chamber Music Festival.

William Purvis pursues a multifaceted career in the U.S. and abroad as horn soloist, chamber musician, conductor, and educator. An advocate of new music, Mr. Purvis has participated in many premieres as hornist and conductor. He is a member of the New York Woodwind Quintet, the Orchestra of St. Luke’s, and the Triton Horn Trio and is an emeritus member of Orpheus. A frequent guest artist with the Chamber Music Society of Lincoln Center, he has also collaborated with the Tokyo, Juilliard, Orion, Brentano, Mendelssohn, Sibelius, and Fine Arts string quartets. Recent recordings include Peter Lieberson’s Horn Concerto on Bridge (Grammy Award and WQXR Gramophone Award). Mr. Purvis is coordinator of winds and brass at the Yale School of Music, and the interim director of the Yale Collection of Musical Instruments. He is also on the faculties of Juilliard and SUNY Stony Brook.

Mike Roylance, tuba, has been tubist of the Boston Symphony Orchestra since 2003. He attended the University of Miami and received a B.A. degree from Rollins College in Winter Park, Fla. He studied with Chester Schmitz, Connie Weldon, James Jenkins, Bob Tucci, Gene Pokorny, and Floyd Cooley. At Rollins College, he served on the faculty conducting the brass ensemble and later was appointed professor of tuba and euphonium at the University of Central Florida. He has performed with the Chicago Symphony Orchestra, Minnesota Orchestra, and Seattle Symphony Orchestra and served as principal tubist with the Civic Orchestra of Chicago. As a freelance musician and teacher in Orlando, Fla., he performed on tuba and electric bass in a wide variety of ensembles. He was a member of Walt Disney World's "Future Corps" and principal tubist with the Walt Disney World Orchestra. His career also includes performances and master classes in Europe and Japan. Mr. Roylance joined the Yale faculty in 2008.

For more than two decades, pianist Mihae Lee has appeared throughout North America, Europe, and Asia in solo recitals and chamber music concerts, performing in such venues as Lincoln Center, the Kennedy Center, Jordan Hall, Berlin Philharmonie, Academia Nationale de Santa Cecilia, Warsaw National Philharmonic Hall, and Taipei National Hall. She has been an artist member of the Boston Chamber Music Society since 1987, a member of the Triton Horn Trio, and a guest artist with the Chamber Music Society of Lincoln Center and Speculum Musicae. She has premiered and recorded works by such composers as Gunther Schuller, Paul Lansky, Henri Lazarof, Michael Daugherty, and Ned Rorem. In addition, she has performed regularly at Bargemusic in New York and has collaborated with the Muir, Cassatt, and Manhattan string quartets. Born in Seoul, Korea, Ms. Lee came to the United States in 1972 and holds a B.M. and M.M. from The Juilliard School and an Artist Diploma from the New England Conservatory.