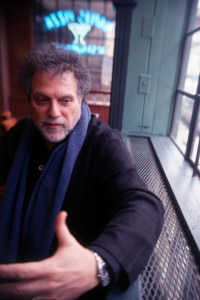 New Music New Haven, the series that showcases young composers from the Yale School of Music as well as faculty and distinguished guests, will feature faculty composer Martin Bresnick in a concert on Thursday, February 4, 2010 at 8 pm in Sprague Hall (470 College Street, New Haven).

The program opens with Reena Esmail’s Feritas, a wild and colorful virtuoso piece for six trumpets, and continues with Omar Surillo’s biographical Quartet for flute, violin, cello, piano. Richard Harrold’s Not the Furniture Game for guitar and voice follows. The final student work on the program is Jordan Kuspa’s Wild and Ferocious Plants, a quartet for clarinet, vibes, violin, and cello.

Bresnick’s Piano Trio, written in 1988 for the Monticello Trio, concludes the program. Each of the trio’s four movements bears a suggestive title reflecting the spirit of the movement; the fourth movement incorporates and transforms aspects of the three preceding movements.

The concert will be streamed live, in both video and audio, at music.yale.edu/media.

Admission to the performance is free. Christopher Theofanidis is the artistic director of New Music New Haven. For more information, visit music.yale.edu or call the Yale School of Music concert office at 203 432-4158.

About the featured composer

The music of Martin Bresnick, Charles T. Wilson Professor in the Practice of Composition at the Yale School of Music, has been performed in festivals and concerts throughout the world. He has been acclaimed for compositions in virtually every medium from chamber and symphonic music to film and computer music. He has won numerous honors including the Rome Prize, the Stoeger Prize for Chamber Music from the Chamber Music Society of Lincoln Center, the first Charles Ives Living Award from the American Academy of Arts and Letters, the Aaron Copland Award for teaching from ASCAP, a Berlin Prize Fellowship from the American Academy in Berlin, and a Guggenheim Fellowship. He was recently elected a member of the American Academy of Arts and Letters. He has had commissions from the Koussevitzky and Fromm foundations, Chamber Music America, Meet-the-Composer, and the NEA, as well as individual ensembles and performers. Martin Bresnick's compositions are published by Carl Fischer, Bote & Bock, and CommonMuse, and have been recorded by Cantaloupe, New World, Albany, Bridge, CRI, Centaur, and Artifact Music.