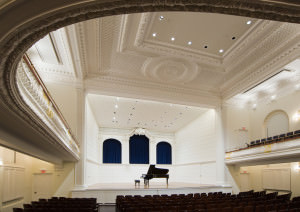 The Yale School of Music is proud to announce the debut of its virtual concert hall: beginning February 1, concerts held in Morse Recital Hall will stream live online with high-definition video and CD-quality audio. Audiences around the world – from prospective students to alumni, from performers’ family members to the general public – will be able to enjoy concerts in real time via the School of Music’s website. Dedicated to cultural leadership, the Yale School of Music is one of the first schools to offer regular live streams of its performances. Associate Dean Michael Yaffe views the live stream as “a logical extension” of the School’s activities on campus. Yaffe emphasized that the streams are not produced segments but are an extension of the concert hall itself. The initiative is part of a multi-pronged technological expansion that also includes digital student portfolios, Internet2 distance learning, new online admissions capabilities, and virtual classrooms. The inaugural stream will begin at 8 pm on February 1 with a Faculty Artist Series recital. Cellist Ole Akahoshi and pianist Elizabeth Parisot will perform music of Bach, Brahms, Barber, and Schnittke. Several other live streams will be offered that week, including performances by the Yale Brass Trio and the Jasper String Quartet, and a tribute to Romanian composer George Enescu. The live stream can be accessed at music.yale.edu/media. Three types of streams will be available: high-definition video; lower-resolution video for those with slower internet connections, and an audio-only stream. Morse Recital Hall, located in Sprague Hall at 470 College Street, is the School of Music’s primary performance venue. An audio-only stream will be available for selected performances in Woolsey Hall and Sudler Hall. For more information about individual events, visit music.yale.edu or call the Yale School of Music concert office at 203 432-4158.