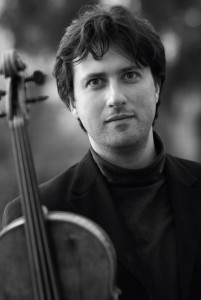 The Yale School of Music presents a Faculty Artist Recital featuring Italian violist Ettore Causa on Tuesday, March 2, 2010 at 8 pm in Sprague Hall. Causa, the newest member of the artist faculty at the Yale School of Music, has been called a “magnificent, consummate musician” (All Music Guide) and has earned high praise for his warm tone.

Causa’s debut CD of viola transcriptions (Claves, 2006) featured several of Causa’s own transcriptions and was warmly received by critics. This recital will feature Causa’s arrangement of six Brahms songs, as well as Krzysztof Penderecki’s Cadenza for Solo Viola; Benjamin Britten’s Lachrymae (Reflections on a Song of Dowland); and Rachmaninov’s Sonata, Op. 19, arranged for viola by Vadim Borisovsky. Causa will perform with pianist Ryo Yanagitani, a graduate of the School of Music who recently won the Gold Medal and three special prizes in the San Antonio Piano Competition.

The recital will stream live at music.yale.edu/media. Admission to the performance is free. For more information, visit the Yale School of Music's website or call 203 432-4158.

Born in Naples, Italy, Ettore Causa began his studies of violin and viola at the Naples Conservatory, where he graduated with the highest honors. He later studied at the International Menuhin Music Academy in Switzerland with Sir Yehudi Menuhin and others, and with Michael Tree at the Manhattan School of Music. He has been first solo viola of the Carl Nielsen Philharmonic (Denmark) and leader of the Copenhagen Chamber Soloists. In 2000, he was awarded the Peter Schidlof Prize and the John Barbirolli Prize at the prestigious Lionel Tertis International Viola Competition. He has since made solo and recital appearances around the world, performing in Victoria Hall (Geneva), Zurich Tonhalle, Madrid National Auditorium, Barcelona Auditorium, Salle Cortot (Paris), Teatro Colón (Buenos Aires), Tokyo and Osaka Symphony Hall, and Carnegie Hall (New York). He has played at festivals including the Menuhin, Festival de Estoril, Salzburg, Festival del Pontino, Tivoli (Copenhagen), Perth, Prussia Cove (England), Savonlinna, and Lanaudiere (Canada). He is a member of the Aria Quartet and is regularly invited to play with colleagues such as Pascal Rogé, and Thomas Adès. In 2001, Causa was appointed professor of viola and chamber music at the International Menuhin Music Academy. He regularly gives master classes in Europe and Argentina. His first recording, for Claves, was crowned with the 5 Diapason. A new recording, of the Brahms sonatas, has already been highly praised by critics worldwide. Ettore plays on a viola made for him by Frederic Chaudiere in 2003.