“Authentic Baroque performance at its best.”
–The New York Times 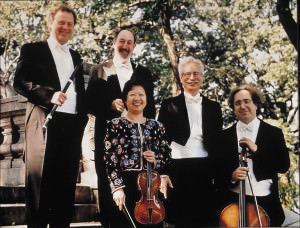 The Yale Collection of Musical Instruments will present the renowned early music ensemble Aulos in the Collection’s last concert of the season on Sunday, April 18, 2010 at 3 pm. Aulos is one of the country’s oldest and most distinguished groups devoted to the performance of music in its historical context. The concert will take place in the intimate venue of the Yale Collection of Musical Instruments, one of the foremost institutions of its kind.

About the Aulos Ensemble

The Aulos Ensemble was formed in 1973 by five Juilliard graduates. In 1978, with the release of the recording Masterpieces of the High Baroque, Aulos established its reputation for exhilarating performances informed with scholarly insight, and its uncompromising standard of excellence in performance has resulted in invitations from virtually all of this country's major chamber music presenters. Among the stars of the period instrument movement that have appeared with the ensemble over the years are harpsichordists Trevor Pinnock and Albert Fuller, violinists Jaap Schroeder and Stanley Ritchie, cellist Anner Bylsma, oboist Michel Piguet, and vocalists Jan de Gaetani, Bethany Beardslee, Charles Bressler, Julianne Baird, Dawn Upshaw, Sanford Sylvan, and Derek Lee Ragin.