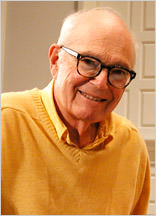 The New Music New Haven concert series presents a program of new music featuring faculty composer Ezra Laderman on Thursday, April 22 at 8 pm in Sprague Hall. Laderman, a composer with a long and distinguished career, will work with graduate performers on his Nonet of the Night, written in 2004. The 20-minute piece is written for a colorful ensemble of winds, strings, piano, and percussion.

Also on the program will be new works by graduate composers in the Yale School of Music’s prestigious composition program. Christopher Theofanidis is the artistic director of the New Music New Haven concert series, which pairs exciting works by established living composers with new compositions by up-and-coming musicians.

Admission to the performance is free. The concert will also stream live in high-definition video at music.yale.edu/media. For more information, visit the Yale School of Music website or call the concert office 203 432-4158.

Ezra Laderman is a distinguished and widely performed composer. His commissions have included works for the New York Philharmonic, Chicago Symphony, Los Angeles Philharmonic, Philadelphia Orchestra and the New York City, Turnau, and Tri-Cities operas. He has written works for such chamber ensembles as the Tokyo, Juilliard, Vermeer, Audubon, and Composers quartets and for soloists Yo-Yo Ma, Jean-Pierre Rampal, Emanuel Ax, and Ilana Vered, among many others. Mr. Laderman is the recipient of three Guggenheim Fellowships, the Prix de Rome, and Rockefeller and Ford Foundation grants. He has served as president of the National Music Council, chair of the American Composers Orchestra, director of the NEA Music Program, and president of the American Music Center. Mr. Laderman was elected to the American Academy of Arts and Letters in 1989, and became its president in 2006. From 1989 to 1995 he served as dean of the Yale School of Music, where he is currently a professor of composition.