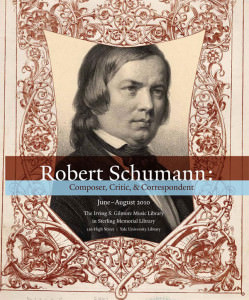 On June 8, the Gilmore Music Library celebrated Robert Schumann’s 200th birthday with the installation of an exhibit designed by Richard Boursy and entitled Robert Schumann: Composer, Critic, and Correspondent.

A central figure in the romantic movement in Germany, Schumann (1810–1856) concentrated on piano music in the early phase of his career, and eventually came to excel in genres ranging from the song to the symphony.

Perhaps the most important music journalist of his era, Schumann edited the Neue Zeitschrift für Musik and wrote reviews heralding the genius of the 21-year-old Chopin and the 20-year-old Johannes Brahms. Clara Wieck Schumann (1819–1896), Robert’s wife, was one of the greatest pianists of the century, and a notable composer as well.

This week the exhibit's online version makes its debut. Click HERE to view.