"Some com­posers are quite shy to talk about their work, for obvi­ous rea­sons: they don’t want to reveal their “tricks”, or they don’t want to share a pri­vate or per­sonal inspi­ra­tion behind a piece, and so on," writes the CUNY Graduate Center Advocate. Not so Martin Bresnick, who in a presentation at Music10 "dove right into the sub­stance of his work: why he com­poses, how he com­poses, and what his pieces are all about." 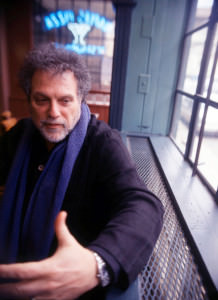 Bresnick, a longtime member of the composition faculty at the Yale School of Music, was a guest composer this year at Music10, a two-week festival of new music at the Hindemith Music Centre in Blonay, Switzerland. The CUNY reporter summarized his presentation in detail. Highlights are reprinted below; click here for the full article.

Bres­nick started off quite seri­ously by admon­ish­ing the com­posers and per­form­ers that music is dan­ger­ous and pow­er­ful, and that one must always treat it as a life and death matter. One must always do music at the high­est level; in a sense, he said, being a musi­cian is sim­i­lar to being called to priesthood.

This phi­los­o­phy guides Bresnick’s own work. He brings every­thing he can to his music, to the point that he con­sid­ers his own artis­tic aims to be “exces­sively ambitious.” In his works, he strives to be per­son­ally expres­sive and philo­soph­i­cal, and to cre­ate archi­tec­tonic forms.

That last aim — cre­at­ing archi­tec­tonic forms - was one of the recur­ring themes through­out Bresnick’s pre­sen­ta­tion. Bres­nick said out­right at the begin­ning of his talk that he felt that many of the stu­dent com­posers at Music10 neglected for­mal integrity in favour of the sur­face ele­ments of a com­po­si­tion. His point of view pro­vided a nice coun­ter­point to those of Hartke and Hoff­man, who dis­cussed pri­mar­ily sur­face ele­ments, such as orches­tra­tion, and the impor­tant role that intu­ition plays when they compose. Intuition plays a less sig­nif­i­cant role in Bresnick’s com­po­si­tional process, as he does not rely on it when he works out the for­mal ele­ments of a composition.

This is not to say that the sur­face of a com­po­si­tion is unim­por­tant to Bres­nick — as he put it, “Nobody fell in love with their part­ner because they have beau­ti­ful ribs in their chest!” How­ever, Bres­nick urged the com­posers at Music10 to try to strike a bal­ance in their works between cre­at­ing a beau­ti­ful sur­face, and ensur­ing that there is a last­ing struc­ture hold­ing that sur­face up.

The same student journal also discussed Bresnick's work My Twentieth Century in a concert review, calling it "my favourite work of the night."