Libby Van Cleve to succeed Perlis as director of OHAM 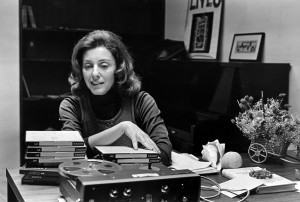 Vivian Perlis, the founder and Director of the Oral History of American Music (OHAM) project at Yale, has announced that she will step down as Director on June 30, 2010. Perlis, a historian in American music, specializes in twentieth-century composers and is known for her publications, lectures, recording and film productions. She founded OHAM and developed it into a unique archive of recorded interviews with leading figures in American music. In April of this year, in recognition of Perlis’s accomplishments, Dean Robert Blocker presented her with the prestigious Sanford Medal from the Yale School of Music. The School of Music also presented two concerts drawing on OHAM's extensive collections, one on campus in Sprague Hall and the other in Zankel Hall at Carnegie Hall in New York. Among Perlis’s publications are: Charles Ives Remembered: An Oral History, which was awarded the Kinkeldey Prize of the American Musicological Society in 1975; and two volumes co-authored with Aaron Copland: Copland: 1900 Through 1942, which garnered a Deems Taylor/ASCAP award, and Copland: Since 1943. Perlis is co-author with Libby Van Cleve of the award winning book and CD publication, Composers’ Voice from Ives to Ellington, published by Yale University Press (2005). Among her productions are recordings of the music of Leo Ornstein and Charles Ives, and television documentaries on Ives, Eubie Blake, Aaron Copland, and John Cage. Vivian Perlis received the Charles Ives Award from the National Institute of Arts and Letters (1972); a Grammy nomination for “Charles Ives 100th Anniversary” (1974); the Harvey Kantor Award for excellence in the field of oral history (1984); a Guggenheim Fellowship (1987); and the Irving Lowens Award for distinguished scholarship in American Music from the Society for American Music (1991). With recognition of her leadership, the American Music Center awarded OHAM a Letter of Distinction (2004). Perlis received the Lifetime Achievement Award from the Society for American Music (2007) and was named an honorary member of the American Musicological Society (2008). As Senior Research Scholar at Yale, Vivian Perlis will continue her work in the field of American Music. Among her many activities as consultant and lecturer, she continues as Vice President of the Aaron Copland Fund for Music and the Charles Ives Society. Libby Van Cleve will succeed Perlis as Director of OHAM. A graduate of the Yale School of Music, Van Cleve is the co-author of Composers’ Voices from Ives to Ellington and the author of Oboe Unbound, a book on contemporary oboe techniques. She is an adjunct professor at Wesleyan University and Connecticut College, and has served as Associate Director of OHAM since 2000. Now celebrating its fortieth anniversary, in 2008 OHAM became a component of the Irving S. Gilmore Music Library at Yale, with transitional support from the Andrew W. Mellon Foundation. For more information, visit www.yale.edu/oham. Oral History of American Music Oral History of American Music (OHAM) is the preeminent project in the field of music dedicated to the collection and preservation of oral and video memoirs in the voices of the creative musicians of our time. The project’s origins can be traced back to 1968 when Vivian Perlis, then a reference librarian at Yale’s Music Library, began to conduct interviews with individuals who had known and worked with the composer Charles Ives. Her award-winning book, Charles Ives Remembered, was published in 1974 by Yale University Press, and was quickly hailed as a model of how oral history could illuminate the activities of musicians and their place in society. Following the Ives project, it was evident that there was no systematic scholarly research in place to document the work of musical figures by means of tape-recorded interviews. Several composers had spoken about Ives and themselves, including Arthur Berger, Elliott Carter, Lou Harrison, Bernard Herrmann, Nicolas Slonimsky, and Dane Rudhyar. These formed the nucleus for a broader-based project, Oral History of American Music. Since the founding of OHAM, composers have continued to be the project's primary focus and OHAM currently holds over 2,000 interviews with over 900 subjects. Project staff continue to interview major figures in American music. In addition to the ongoing efforts to document contemporary American music, OHAM is an important archive and provides primary source materials to scholars, arts presenters, students, and radio and television producers. Several highly esteemed musicological publications have been derived directly from OHAM interviews, including Copland: 1900-1942, co-authored by Aaron Copland and Vivian Perlis; Copland Since 1943, by Copland and Perlis; and the book and CD publication, Composers’ Voices from Ives to Ellington, co-authored by Perlis and OHAM Associate Director Libby Van Cleve. OHAM has recently produced two netcasts on the composers Aaron Copland and Charles Ives. To learn more about OHAM and to listen to the netcasts visit OHAM's website.