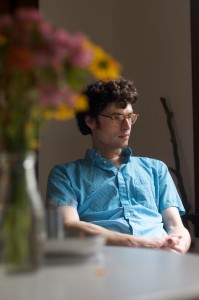 The first round of composers to advance in Orpheus Chamber Orchestra's Project 440 was announced live on New York Public Radio yesterday morning. Four Yale School of Music composers were among those advancing to the next round: Timothy Andres, Judd Greenstein, Polina Nazaykinskaya, and Andrew Norman. Preben Antonsen, an undergraduate in Yale College, also advanced.

The project, which began with 60 composer candidates and will conclude with the selection of four Orpheus commission recipients later this year, offers the public a rare glimpse into the ways new commissions come to be. Yesterday's announcement narrowed the field from 60 nominees down to 30. a subsequent round of elimination on September 9 will see 12 candidates advance to the final round, and the four winners will be announced in mid-October.

Orpheus designed Project 440 in keeping with the passion for new music and for transparency of the creative process that has been a hallmark of the orchestra since its inception in 1972. The project is documented online on the WQXR website, where fans and members of the public have engaged in lively debate about each of the candidates and Project 440 as a whole.

Each composer nominee has a profile page that features samples of his or her previous work and the opportunity for the public to post reactions and comments. The website has fostered dialogue about the nature of commissioning, elements of Project 440 that resemble a popularity contest, and a number of other topics. All of the decisions regarding the elimination of candidates are made by a Selection Committee comprised of Orpheus musicians and staff as well as previously commissioned composers.

Orpheus cellists and Selection Committee members Jonathan Spitz and Eric Bartlett have created a series of videos to document the project from their perspective as well.  Those videos are available through the Orpheus Chamber Orchestra YouTube channel.

The 30 composers selected to advance to the second round in Project 440 are: