“The Yale School of Music has established a formidable presence with its Yale in New York series at Carnegie Hall these last three seasons, mainly by presenting inventive programs of mostly new or unusual works.”
— Allan Kozinn, The New York Times, 2/10/10 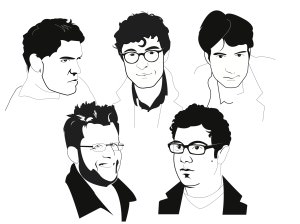 The composers’ works have appeared in clubs and concert halls throughout the U.S. and Europe, with performances by ensembles ranging from the Los Angeles Philharmonic and Minnesota Orchestra to New York City Opera and the JACK Quartet.

Sleeping Giant presents music that prizes vitality over a rigid aesthetic. Its fall showcase at LPR features a healthy variety of music from its composers. The world premiere of Jacob Cooper’s austere and time-bending Cello Octet is pit against Ted Hearne’s rhythmic and metallic duet for piano and percussion One of Us, One of Them. Christopher Cerrone’s strikingly visual Averno: A Fragment, set with voracity and longing to texts by Louise Glück, will be played alongside Timothy Andres’s gracious Clamber Music and Robert Honstein’s rock-inspired song-without-words Why Are You Not Answering.

Christopher Cerrone describes Sleeping Giant as “a network of interrelated and interconnected styles more than one united by a single aesthetic. Jacob and I write music influenced by the translation of electronic music into acoustic music; Jacob and Ted have a strong interest in rock instrumentation. Ted and Timo have a strong interest in pulsation; Timo and Robert write music of extreme gentleness. So while there’s not one interconnecting thread, each of us have common interests that draw us together.”

And members of the Yale Philharmonia