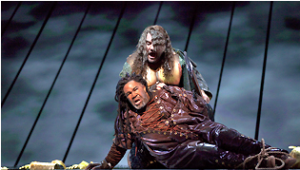 Starting this fall, the Yale University community will have the unique opportunity to view the Metropolitan Opera’s Live in HD broadcasts on campus free of charge through a gift from Frederick Iseman, Yale College alumnus of the Class of 1974. This generous gift will fund Yale’s access to the twelve operas scheduled for live transmission during 2010–2011, as well as the installation of new sound and projection technology in Sprague Hall, where the performances will be shown.

Additionally, Mr. Iseman’s gift will enable area high school students to experience the Met’s performances by providing 200 tickets for the Live in HD series presented at the Branford 12 movie theater. Ticket distribution to the high schools will be administered through the Music in Schools program at Yale School of Music.

Nine former students of the Yale School of Music are among the singers performing in the twelve operas being simulcast this year. Das Rheingold, the first broadcast, will include Tamara Mumford (Flosshilde) and Adam Diegel (Froh).

Members of the Yale community can reserve tickets for the Iseman Broadcasts HERE.

More information about the operas scheduled for broadcast during the 2010–2011 season of The Met Live in HD is available HERE.