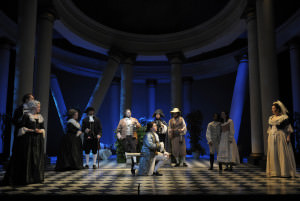 Yale Opera's annual production at the Shubert Theater will be a brand-new production of Mozart's Don Giovanni, conducted by Giuseppe Grazioli and directed by Sam Helfrich. The production, to be performed February 11, 12, and 13, 2011, will feature set design by Andrew Holland, costume design by Kaye Voyce, and lighting design by William Warfel. The opera will be performed in Italian with projected English translations.

In the spring, Yale Opera will present a double bill of The Scarf (music by Lee Hoiby) and Dido and Aeneas (music by Henry Purcell). This production, which will be directed by Mark Streshinsky, director, will be performed April 29 and 30, 2011. The production will feature lighting design by William Warfel and projections designed by Jeremy Knight.

Maria Padilla (Gaetano Donizetti)
Performed in concert and recorded as a a part of the 2011 Beethoven Easter Festival
April 3–14, 2011, Warsaw, Poland