"The technical mastery of a solo recital with with the exuberance of a jam session."
– Post Gazette 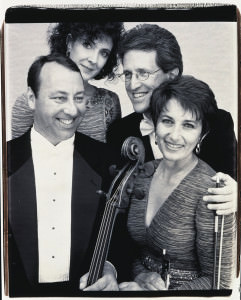 The Chamber Music Society at Yale presents OPUS ONE in a recital on Tuesday, December 7, 2010 at 8 pm in Sprague Hall (470 College
Street, New Haven). The distinguished piano quartet has garnered widespread acclaim since its debut twelve years ago. Its members, who have all built high-profile careers of their own, are Anne-Marie McDermott, piano; Ida Kavafian, violin; Steven Tenenbom, viola; and Peter Wiley, cello. Kavafian is the sister of violinist Ani Kavafian, a member of the Yale School of Music faculty.

The concert will open with Mozart's beloved Quartet for Piano and Strings in G minor, K. 478. Next will be the East Coast premiere of Lowell Liebermann's new Quartet for Piano and Strings, which the ensemble premiered this past August. "It was an incredibly beautiful piece, and well received," wrote the Sangre de Cristo Chronicle. The evening will conclude with Schumann's masterful Quartet in E-flat major, Op. 44.

Of one performance, the San Diego Union-Tribune wrote: "Opus One sang and soared, trilled and thrilled. Its sense of musical coordination was confident, its grasp of artistic subtleties, strong.... there was a keen sense of teamwork and mutual support."

The Chamber Music Society at Yale is directed by the clarinetist David Shifrin.

Tickets to the performance are $25 to $35, $10 for students. For more information or to purchase tickets, visit music.yale.edu or call the Yale School of Music concert office at 203 432-4158.

OPUS ONE brings together four of the leading musicians of our time: pianist Anne-Marie McDermott, violinist Ida Kavafian, violist Steven Tenenbom, and
cellist Peter Wiley. Veterans of the world's most prestigious chamber groups including the Chamber Music Society of Lincoln Center, Tashi, Beaux Arts
Trio, and the Orion and Guarneri String Quartets, OPUS ONE is the result of a mutual love of musicmaking between four extraordinary instrumentalists and
friends. 1998-99 marked the quartet¹s inaugural season, with a debut at the Library of Congress. Subsequent seasons have included acclaimed performances
in New York (at Lincoln Center and Town Hall), Detroit, Los Angeles, Cincinnati, Cleveland, Pittsburgh, Philadelphia, Portland (Ore.), and San
Diego. OPUS ONE has presented several world premieres, including co-commissions from Stephen Hartke and George Tsontakis and a work by Marc
Neikrug. Recent appearances include a third NPR feature and festival performances at Caramoor, Chamber Music Northwest, June Music Festival
(Albuquerque), Great Lakes Chamber Music Festival, Music from Angel Fire, and Mainly Mozart (San Diego). They have recorded music of Dvorak, Aaron
Kernis, and Stephen Hartke