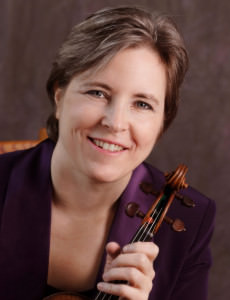 The Yale School of Music will present violinist Wendy Sharp and colleagues in a Faculty Artist Recital on Sunday, January 30, 2011 at 4 pm in Morse Recital Hall in Sprague Hall (470 College Street, New Haven). Sharp will be joined by violist Marka Gustavsson, cellist Mimi Hwang, and pianist Melvin Chen in a program of music spanning three centuries.

The concert will open with the Handel-Halvorsen Passacaglia for violin and cello, a piece that Halvorsen adapted from a keyboard suite by Handel. Chen, a graduate of Yale College and a former faculty member of the Yale School of Music, will play Debussy’s Suite Bergamasque, best known for its gentle third movement, “Clair de Lune.” The first half will conclude with the world premiere of John Halle’s Many Returns for violin and viola. The second half of the program will feature all four musicians in the Piano Quartet No. 2 in A major, Op. 26, by Johannes Brahms.

Award-winning violinist Wendy Sharp performs frequently as a recitalist and a chamber musician. In demand as a teacher and chamber music coach, she is on the faculties of the Yale School of Music and California Summer Music, and maintains a private studio.  For nearly a decade, Ms. Sharp was the first violinist and a founding member of the highly acclaimed Franciscan String Quartet. As a member of the quartet she toured the USA, Canada, Europe, and Asia, and was honored with many awards including first prize in the Banff International String Quartet Competition and the Press and City of Evian prizes at the Evian International String Quartet Competition. A native of the San Francisco Bay area, she attended Yale University, graduating summa cum laude with distinction in music, and received her Master of Music degree from the San Francisco Conservatory of Music. Ms. Sharp has served on the faculties of the Mannes College of Music, Dartmouth College, the San Francisco Conservatory of Music, and Choate Rosemary Hall, and has participated in the Aspen, Tanglewood, Chamber Music West, Norfolk, Britten-Pears and Music Academy of the West festivals. Ms. Sharp is currently the director of chamber music at the Yale School of Music, where she has also served on the violin faculty since 1997.