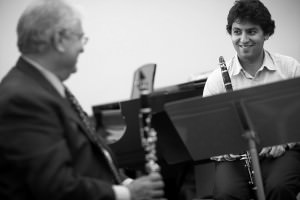 Emil Khudyev was named the winner of the classical clarinet division of the inaugural Vandoren Emerging Artist Competition. The winners will also perform at the Music For All National Festival (held in Indianapolis in March, 2011) and will participate in master classes with Vandoren artists at the festival. The award also includes a cash prize as well as a trip to Paris to visit the Vandoren offices, the Paris Conservatoire, and meetings with influential Vandoren artists and mouthpiece and reed specialists.

Born in 1986 in Turkmenistan, Emil Khudyev began his musical training under the auspices of the Moscow Conservatory. At the age of 7, Emil was admitted to the Special Music School of Turkmenistan, then part of the Soviet Union. In the summer of 2001 Emil won a full scholarship to attend the Interlochen Arts Camp. While there, he was offered a full scholarship to study at Interlochen Arts Academy, where he then studied for four years with Nathan Williams. In 2005 Emil began further studies at the Cleveland Institute of Music under Franklin Cohen. In 2006, he was selected to participate in the Carnegie Hall Workshop Young Artist Concert under the great conductor David Robertson. He currently studies with David Shifrin at the Yale School of Music.