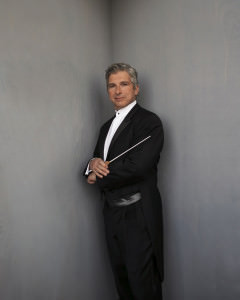 Peter Oundjian – a longtime faculty member of the Yale School of Music, the principal guest conductor of the Philharmonia Orchestra of Yale, and a former first violinist of the Tokyo String Quartet – was named the new music director of the Royal Scottish National Orchestra. He will succeed  Stéphane Denève in the role.

According to the Herald Scotland, Oundjian will conduct six weeks of his first season, seven in the second, and eight concerts in his third and fourth seasons. He will also work with the RSNO on recordings, appearances throughout the UK, and international tours. Oundjian will also continue to be music director of the Toronto Symphony Orchestra.

An adjunct professor of music at YSM, Peter Oundjian studied violin at the Royal College of Music in London, England. After winning the Gold Medal there, he went on to Juilliard to study with Ivan Galamian. He also worked with Itzhak Perlman, Dorothy DeLay, and members of the Juilliard String Quartet. In 1980 Professor Oundjian won first prize in the International Violin Competition in Vina del Mar, Chile. He performed as recitalist throughout North America under the sponsorship of the Pro Musicis Foundation, making his New York recital debut in 1981. He has soloed with the Boston Pops and the Toronto, Montreal, and Winnipeg symphony orchestras, the National Arts Center Orchestra, and the Calgary Philharmonic.

He was first violinist of the Tokyo String Quartet from 1981 to 1995, and made his formal conducting debut in 1995 with the Orchestra of St. Luke’s. Since then he has conducted the Boston, Chicago, San Francisco, St. Louis, Houston, Cincinnati, and Berlin symphony orchestras, the Minnesota Orchestra, the Philadelphia Orchestra, the Los Angeles Philharmonic, Zurich Tonhalle, and the St. Paul Chamber Orchestra. He is the music director of the Toronto Symphony Orchestra, artistic director of the Caramoor Festival, and artistic director and principal guest conductor of the Detroit Symphony. He has been on the School of Music faculty since 1981.