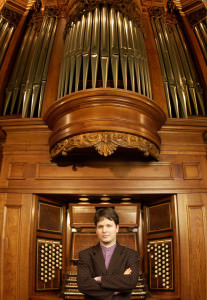 Paul Jacobs ’02MM, ’03AD was awarded a Grammy on Sunday by the National Academy of Recording Arts and Sciences. He won in the category of Best Instrumental Soloist Performance without orchestra for his recording of Olivier Messiaen's Livre du Saint-Sacrement. The recording, his second album, was released in September on the Naxos label.

In an interview in December, Jacobs said, "Who would have believed that twentieth-century French organ music would be up for a Grammy?"

According to one article, Jacobs is the first organist to ever win a Grammy. He is currently the chairman of the organ department at the Juilliard School in New York.

Jacobs performed the complete Livre du Saint-Sacrement on the Newberry Organ in Woolsey Hall as part of the Yale School of Music's celebration of the Messiaen Centenary in December 2008.