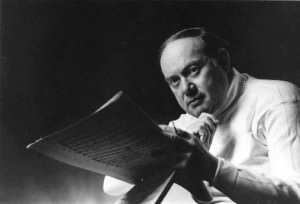 Violinist and conductor Sidney Harth died on February 15, 2011 in Pittsburgh. He was 85 years old. Harth served on the faculty of the Yale School of Music for seventeen years; he also led the conducting programs at Mannes College of Music, University of Texas in Houston, and the Hartt College of Music. He was the head of the music department and the Andrew W. Mellon Permanent Professor of Music at Carnegie Mellon University. Concurrently, he was also the director of orchestral activities at the Mary Pappert School of Music at Duquesne University.

Sidney Harth graduated from the Cleveland Institute of Music and studied with Joseph Knitzer, Michel Piastro and Georges Enesco. He married his classmate Teresa Testa, who was likewise a musician. Both their children, Laura and Robert, also became professionals in music production and arts administration. Teresa Harth passed away in February 2010. Their son, Robert J. Harth, was CEO of Carnegie Hall; he passed away in January 2004. Sidney Harth is survived by his daughter, music producer Laura Harth Rodriguez, as well as his son-in-law and grandson.

Click here for the obituary in the Pittsburgh Post-Gazette, which includes information about the funeral, donations, and sending condolences.

Here is another obituary for Mr. Harth.