The Yale School of Music presents a New Music New Haven concert on Thursday, April 14, 2011 at 8 pm in Morse Recital Hall in Sprague Hall (470 College Street, New Haven). The concert will feature composer Yehudi Wyner, a graduate of Yale (’50BA, ’51BM, ’53MM) and a former professor at the Yale School of Music. On This Most Voluptuous Night, the piece featured on this concert, is scored for soprano, flute, horn, string quartet, and piano, and was written in 1982 for the composer’s wife. 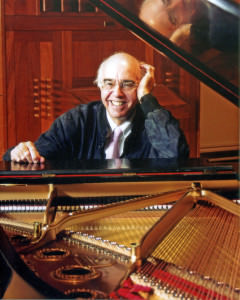 Wyner’s music, writes the Boston Globe, “revels in the sheer physicality of performance and the rush of communicating with a live audience.” It is “vital and capacious, often finding fresh ways of wedding extremely visceral expression with a refined sense of craft.”

This concert will also present five pieces for unconventional chamber ensembles by up-and-coming composers: Justin Tierney’s Zephyrus for clarinet, viola, and harp; Andy Akiho’s LigNEouS for string quartet and marimba; Jordan Kuspa’s Hit the Spot for steel pan and string quartet; Hannah Lash’s Folksongs for piccolo, harp, and percussion; and Adrian Knight’s The Caligari Project for clarinet, viola, cello, accordion, piano, and percussion. Caligari Project was commissioned by the Red Light Ensemble for the film The Cabinet of Doctor Caligari.

The New Music New Haven concert series is directed by Christopher Theofanidis. This performance is free and open to the public. For more information, visit music.yale.edu or contact the Yale School of Music concert office at 203 432-4158.

Pulitzer Prize-winning composer Yehudi Wyner has created a diverse body of works for orchestra, chamber ensemble, solo performers, theater music, and liturgical services. In addition to composing and teaching, his active and eclectic musical career includes work as a performer, director of two opera companies, and conductor of numerous ensembles in a wide range of repertory. Yehudi Wyner studied piano at Juilliard and continued his musical studies at Yale and Harvard. Since winning the Rome Prize in 1953, he has received many honors, including the 2006 Pulitzer Prize in Music, two Guggenheim Fellowships, and the Elise Stoeger Award from Chamber Music Society of Lincoln Center. He has been commissioned by the Ford Foundation, Koussevitzky Foundation at the Library of Congress, NEA, and numerous chamber music ensembles. Recordings of his music can be found on New World Records, Naxos, Bridge, Albany, Pro Arte, CRI, and Columbia Records. Since 1968, Mr. Wyner has been a keyboard artist for the Bach Aria Group. He recently retired as a professor of composition at Brandeis University, a post he held since 1991, and was a frequent visiting professor at Harvard. He also taught at Yale, SUNY Purchase, Cornell, and Tanglewood. Wyner has been composer-in-residence at the Sante Fe Chamber Music Festival, the American Academy in Rome, and the Rockefeller Center at Bellagio, Italy