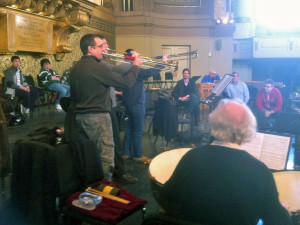 It was a great pleasure to go to the masterclass given by Jean-Francois Madeuf and his natural trumpet colleagues. Madeuf began the masterclass by speaking about the difference between natural trumpets and baroque trumpets. A natural trumpet has no system of valves or vent holes to alter the pitch which means that it is limited to only the notes of the natural harmonic series. A baroque trumpet is a trumpet used to play baroque music to which has been added a modern system such as vent holes; these allow the instrument to play notes outside of the natural harmonic series.

Madeuf is the most highly regarded natural trumpeter in the world and plays with an incredibly beautiful, pure tone. He also plays perfectly in tune in the high register, a great feat for the natural trumpeter. As you go higher in the instrument's register, many of the notes in the natural harmonic series are out of tune; it is up to the player to "lip," or bend, these notes in tune. Some notes – A", for example – are particularly difficult to play because the notes Ab" and Bb" are in the natural harmonic series, and one has to lip these pitches into tune. Madeuf played these notes in tune with ease and mastery.

Madeuf also spoke about the history of trumpet playing. The trumpet was accepted into art music in the early seventeenth century, when composers began writing into the high register of the instruments. Players had to develop the technique to play these notes in tune. 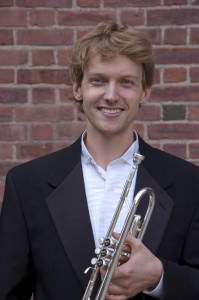 Madeuf spoke about his transition from modern trumpet to natural trumpet, which took him years to accomplish. He suggested that trumpeters who were interested in playing the natural trumpet give themselves plenty of time to learn the proper technique, starting with easy exercises and pieces in the low and middle register (using an authentic mouthpiece and no vent hole system) and very gradually, over the course of years, developing the technique to play in the high register with excellent control.

He encouraged younger players to spend the time and do the work to learn how to play the natural trumpet. It was said that it was incredible what he did ("c'est incroyable"), and Madeuf responded, "Non, c'est faisable" (no, it's doable). Now it is for us to do the work and learn how to play in this beautiful style.